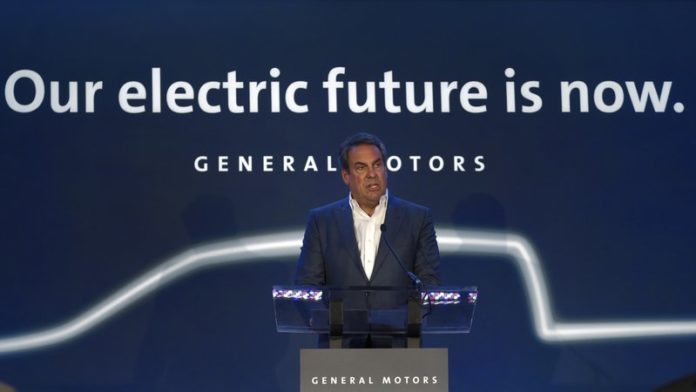 General Motors is spending $2.2 billion to refurbish an underused Detroit factory so it can build a series of electric and self-driving vehicles, eventually employing 2,200 people.

GM said in a statement Monday that the factory will start building the company’s first electric pickup late in 2021, followed by a funky-looking self-driving shuttle for GM’s Cruise autonomous vehicle unit.

The truck will be the first of several electric vehicles to be built at the plant, which straddles the border between Detroit and the enclave of Hamtramck. The company has plans to revive the Hummer nameplate for one of the vehicles.

In November of 2018 GM announced plans to close the factory along with three others in the U.S. But the company promised to reopen Detroit-Hamtramck to build electric vehicles during last fall’s contentious contract negotiations with the United Auto Workers union.

At that time the plant employed about 1,500 hourly and salaried workers. Currently the plant is working on one shift with about 900 workers making the Cadillac CT6 and Chevrolet Impala sedans.

The factory will be shut down at the end of February, when renovations are expected to begin. The general assembly area as well as the paint and body shops will get major upgrades including new machinery, conveyors and controls, GM said in a statement.

GM will also invest $800 million in equipment for parts suppliers and other projects related to the new electric trucks.

The factory will be GM’s first assembly plant to be fully dedicated to building electric vehicles.

“Through this investment, GM is taking a big step forward in making our vision of an all-electric future a reality,” GM President Mark Reuss said in a statement. He was to announce the plans Monday at the plant with Michigan Gov. Gretchen Whitmer.

The announcement came days after Michigan’s economic-development arm, the Michigan Strategic Fund, agreed to revise tax breaks for GM in exchange for the company’s commitment to invest at least $3.5 billion more over 10 years in the state, including to build electric vehicles at Detroit-Hamtramck.

The value of the automaker’s maximum state tax credit was cut by $325 million, to nearly $2.3 billion through 2029. GM still has to retain at least 34,750 jobs in Michigan — it has about 45,000 now — but got flexibility to count more jobs at its headquarters in Detroit and its research, development and engineering campus in the suburb of Warren.

The plant now employs about 800 people. Production of the Chevrolet Impala will cease at the end of February, at which point renovations will begin to produce electric pickups and other vehicles. The plant will have 2,000 employees once it is at full capacity.

GM CEO Mary Barra has promised an “all-electric future,” with the company restructuring to raise cash in part to develop 20 electric models that it plans to sell worldwide by 2023.

GM already has announced plans by a joint venture with LG Chem to invest $2.3 billion to build a battery cell factory in Lordstown, Ohio. The factory will supply cells to vehicles made at the Detroit plant.

GM expects the Lordstown factory to employ up to 1,000 people. Last year the company closed a giant small-car assembly plant there that employed 4,000 people just two years ago.

Workers at the battery plant likely will make less money than the roughly $30 per hour paid to vehicle assembly plant workers.