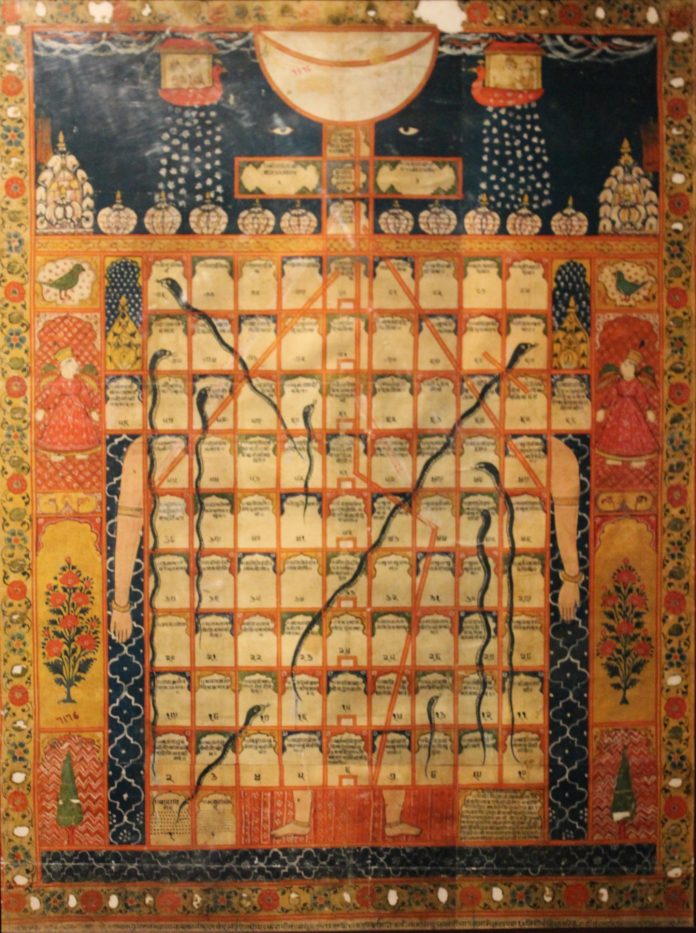 India has another connection to snakes, apart from being the country that is home to one of their largest population – Snakes & Ladders! I had grown up playing the game during family get togethers, all my childhood, without even knowing that there was such a deep meaning behind it.

Once upon a time, when India was known as the Indus Valley Civilisation, when knowledge from the ancient Vedic Scriptures burgeoned, and when invasions weren’t the norm, a Saint by the name of Gyandev introduced a game called Mokshapatam, also known as Parama Padam, which was later renamed by the British as Snakes & Ladders. A staunch believer of Hindu Dharma and it’s teachings, Gyandev wished to teach children the significance of morality, virtues and the consequences of bad deeds.

The Mokshapatam game had two versions – one with 100 squares and one with 72 squares. Both versions consisted of a board with numbered squares drawn on it, and snakes and ladders inscribed within. The goal was to reach the highest and top most square. A die was tossed and the player had to move forward by the same number of squares as that of the die. If the player landed at the bottom of the ladder, he would be allowed to climb up to the higher square, and if the player landed at the mouth of a snake, he would fall down to a lower square.

There was a deeper meaning to the ascent and descent of a player. The bottom of the ladders which allowed the player to go up, depicted a good deed, signifying that good karma takes us higher in life, and the mouth of a snake depicted bad karma, which implied that doing bad deeds would make us fall. The end goal would be to reach the last square that represented Moksha. Moksha generally means Salvation, and the end of the cycle of re-births. It is achieved by overcoming ignorance and desires. It also means one has attained supreme enlightenment and liberation.

In the 72 squared version of Mokshapatam, each box illustrated a Virtue or a Vice and their effects. The squares 24, 44 and 55 depicted the vices of Bad Company, False Knowledge, and Ego. The game strongly emphasized on Karma and the Hindu principle of “Cause and Effect”. Thus, the corresponding effects of the above vices, were portrayed on the squares as Conceit or Vanity, Plane of Sensuality, and Illusion. On the other hand, the virtues of Purification, True Faith, and Conscience were illustrated in the squares 10, 28, and 46 – these led to Heavenly Plane, Plane of Truth, and Happiness respectively. In this version of the board, the goal would be to reach box number 68, which is the plane of Shiva – ultimately gaining Moksha, or liberation.

The 100 squared version of Mokshapatam, was also symbolic of the meaning that good deeds take us to heaven and evil to a cycle of re-births. In the game, square 12 was Faith, 51 was Reliability, 57 was Generosity, 76 was Knowledge, and 78 was Asceticism. These were the squares where the ladder was found. The top of the ladder depicted a God, or one of the heavens (kailasa, vaikuntha, brahmaloka), while the bottom described a good quality, implying that good karma would take us to heaven.

Conversely, Square 41 was for Disobedience, 44 for Arrogance, 49 for Vulgarity, 52 for Theft, 58 for Lying, 62 for Drunkenness, 69 for Debt, 84 for Anger, 92 for Greed, 95 for Pride, 73 for Murder and 99 for Lust. These were the squares where the snake was found, each snake’s head was a negative quality or an asura (demon). As the game progressed, the various karma and samskara, good deeds and bad, took us up and down the board, amidst illustrations of plants, people and animals.

The goal was to reach square number 100 – which represented Nirvana or Moksha.

The game served a dual purpose – entertainment along with dos and don’ts, divine reward and punishment, ethical values and morality.

This game was so popular that it was adapted by other religions that existed in the Indian subcontinent. Jain, Buddhist and Muslim adaptations of the game also exist, because the concept of “cause and effect”, “reward and punishment”, are common to them. For devout followers of these religions, the game used to be played as a form of meditation, a communal exercise, and even as part of one’s religious studies without the use of conventional books. The Jains also renamed it as “Gyan Bazi”. It was a popular tool to teach children the importance of good deeds and to stay away from the peril of desires.

The game became Snakes and Ladders in the 19th century, when it was introduced to Britain by India’s colonial rulers. Whilst the original gameplay was maintained, its underlying philosophical message was greatly diminished. The religious virtues and vices were replaced by animated images of a snake or a ladder. Additionally, the number of snakes and ladders were equalized, whilst in the original ones, there were usually more snakes than ladders, which implied that it is easier to fall prey to Vices than to uphold Virtues. The game was also introduced in the United States in 1943 by Milton Bradley as Chutes and Ladders.