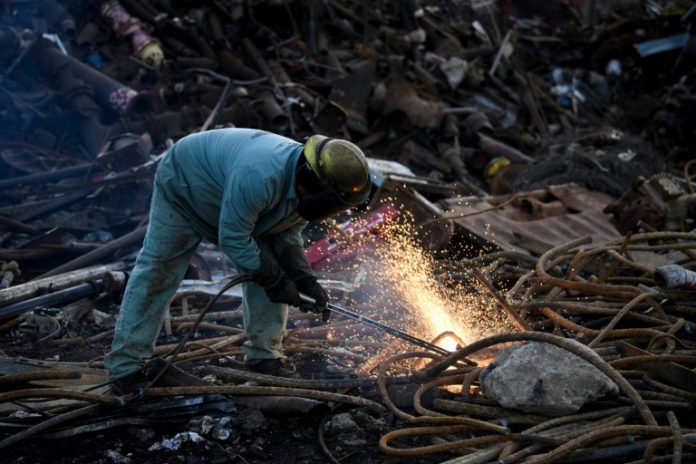 White plumes of smoke billow into the frigid air above the rolling hills of western Pennsylvania, as scorching ovens bake the coal that rolls in by the trainload along the Monongahela River.

Built more than a century ago, Clairton is the largest plant in the United States to manufacture coke, a key component in steel — the longtime bedrock of a region now in economic and political flux.

As the US election season opens, a team of AFP journalists is seeking a closer look at the national mood by driving from Washington to Iowa, which on February 3 holds the first contest to select presidential candidates.

Donald Trump in 2016 won historic Democratic stronghold Pennsylvania by fewer than 45,000 votes, one of several wins that stunned Washington political veterans and propelled the mogul to the White House.

Walking over the icy parking lot of the Clairton plant, 30 kilometers (18 miles) south of Pittsburgh, union leader Don Furko acknowledged he had a delicate task in representing his 1,200 workers.

The United Steelworkers went all in for Trump’s rival Hillary Clinton, but there was so much dissent in the ranks that the union has promised to poll its members this time.

“Trump spoke to a lot of our members,” Furko said. “He was speaking directly to them, is what it seemed like.”

“I don’t think that it’s changed here. I don’t know about other mills, but I know in my membership, the majority of them are still behind Trump,” he said.

Support for Trump is far from universal among the blue-collar workers, many of whom questioned how a billionaire could understand their lives.

“We’ve got the worst president ever in Donald Trump. He’s got more money than China has rice,” said Dennis Melvin, a 75-year-old retired glass factory worker who bemoaned how young people no longer have the same career opportunities.

With another coke factory in Erie, Pennsylvania, shutting down at the end of last year, union leaders at the US Steel plant in Clairton voice confidence in protections under their contract.

Trump has curtailed the collective rights of federal workers and has harshly criticized national unions, urging them to lower their dues and blaming them for plant closings.

But several workers saluted Trump’s tough talk on trade and his negotiation of a new trade deal with Canada and Mexico, which prominent union leaders praised as an improvement.

In sharp differences from the Democrats, Trump has also attacked immigration and mocked the global scientific consensus on climate change.

Floyde Macheska, a retired third-generation coal miner, shared his skepticism about climate change and renewable energy — and questioned whose interests the Democrats had at heart.

“The old-timers, they worked their way up, instead of having someone give them something,” he said over breakfast with his wife — complaining that former president Barack Obama had unfairly championed renewables at the expense of coal.

“They always had the theory that Democrats were there for the working people. Things have changed,” he said.

Macheska, who suffers from black lung, looks back nostalgically to the booming industry of his childhood.

“There were times when you couldn’t even see where you were going it was so smoky. But we still had winters with lots of snow,” he said.

A 2017 study by a pediatrician in Pittsburgh — whose tech industry has now eclipsed steel — found that 22 percent of the city’s children had asthma, far exceeding the national average of 10 percent.

And a December 2018 fire at the Clairton plant temporarily sent sulfur dioxide levels skyrocketing, leading US Steel to promise $1 billion to curb pollution and other investments.

“In general politicians have always been very willing to give steel a pass, seeing them as a major employer,” said Myron Arnowitt, Pennsylvania director of the Clean Water Action advocacy group.

After the fire, “more politicians are willing to say, this has gone too far.”

North on the Ohio River, Aliquippa bears witness to steel’s decline. Much of downtown is boarded up, crumbling buildings inclining ominously on the slopes, from an economy that imploded when the steel mill shut in 1984.

But on the road into town, bustling life can be found at the bowling alley, packed on a weeknight with regulars drawn by specials, homemade pizzas and even an intimately grungy punk club.

Co-owner Jeannie D’Agostino said she has seen a change in young people’s views on industry.

“Long ago, I remember hearing the older women saying that there would be soot from the mills on their porches and walkways and everybody should sweep and they don’t mind — that means our men are working,” she said.

“Now all you would hear are people complaining that it’s so dirty, look what’s happening to the environment.”

Arnowitt, the environmentalist, said there were few fresh hires at the Clairton plant.

The city of Clairton’s population, estimated at 6,566 by the Census Bureau, has declined by two-thirds since 1950.

“Especially young people understand that their future is being squandered. They don’t see a future for themselves in an industry that is employing fewer and fewer people,” he said.