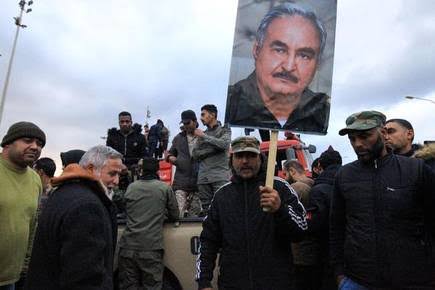 Flights were suspended at the only functioning airport in Libya’s capital Tripoli on Friday because of rocket fire and shelling, as people in eastern Libya protested Turkish military support for their rivals.

Turkey’s parliament voted on Thursday to allow troops to be sent to support the internationally-recognized Government of National Accord (GNA) in Tripoli, deepening fears of more fighting, though analysts and officials said Ankara was unlikely to immediately put boots on the ground.

The GNA has sought Turkey’s support as it fends off an offensive by General Khalifa Haftar’s forces, which control the east and swept through southern Libya in early 2019.

Haftar’s forces said they had carried out air strikes in several places on Friday, including south of the city of Sirte and in Tripoli. Sirte lies in the center of Libya’s coastline, on the dividing line between the warring factions.

An increase in air strikes and shelling in and around Tripoli has caused the deaths of at least 11 civilians since early December and shut down health facilities and schools, the U.N. mission in Libya said.

Haftar’s Tripoli offensive quickly stalled in the outskirts of the city, but led to increased international involvement in the conflict. Turkey has backed the GNA while Haftar has received support from the United Arab Emirates, Egypt and Jordan.

There were protests in several cities and towns in eastern Libya against the Turkish parliament’s decision.

In Benghazi, where about 3,000 people took to the streets, protesters said they had turned out to oppose a Turkish “invasion” of Libya, which was part of the Ottoman Empire before coming under Italian occupation.

Haftar later gave a televised speech in which he announced a “call to arms and mass mobilization … to defend our land and our honor”.

An engineer from Ras Lanuf said one Turkish company had been doing contracting work at Ras Lanuf port since 2017. It was unclear what immediate impact the companies’ statements would have.

Mitiga airport has been repeatedly closed and reopened in recent years because of risks from shelling and air strikes, reopening most recently on Dec. 12 after a closure of nearly 3-1/2 months. It closed early on Friday because of rocket fire nearby, reopened briefly and then shut again because of shelling, airport and airline officials said.