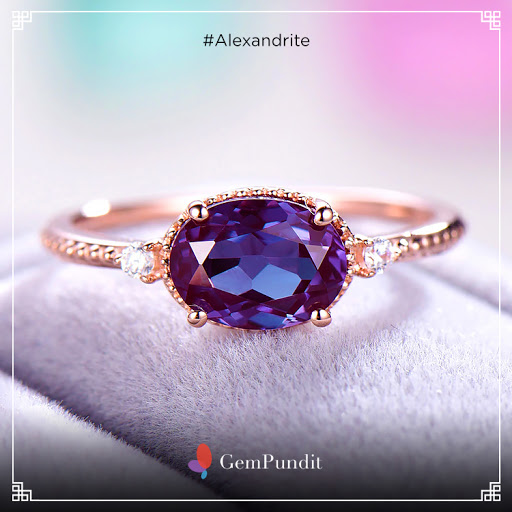 The alexandrite is one of the most fascinating gemstones with their unique colors and rarity. It carries endless charm and unique alexandrite gemstone benefitsthat set it apart from other gemstones. Russia is the place where Alexandrite was first discovered. But, its mining is now done in several other countries as well.

For years, it has been an object of curiosity and admiration from gem lovers. Here are some interesting and amazing facts about alexandrite that make it a special gemstone.

Alexandrite was first discovered in the Ural Mountains in 1834 while there are some stories suggesting its discovery way back in late 1770s.Popular theories believe it was found by a French mineralogist Gustaf Nordenskiold.

When he found the gemstone for the first time, he considered it to be an emerald due to its striking green color. Later, it was named after the Czar of Russia, Alexander the Second, assassinated in 1881.

The most interesting thing about alexandrite is its ability to change color under different light. It switches from a vivid blue green hue under sunlight to reddish color in the incandescent lights.Due to this property, it is also called as a stone that’s ruby by night and emerald by day.

Mining in Other Countries

Many people still identify alexandrite with Russia as its primary origin. However, the mines in Ural Mountains do not produce high-quality alexandrites anymore. The stone is now prominently found in other parts of the world.

Sri Lanka, Brazil, Africa, and India are the leading sources of this gemstone. But, alexandrite stones mined in Sri Lanka are considered to be the best in terms of their quality and color.

While most of the gemstones can undergo some sort of chemical treatments to enhance their color or clarity, alexandrite is rarely treated. It is, thus, an extremely precious and rare gemstone. However, synthetic stones exist due to high alexandrite price per carat.

The fake varieties and cheap imitations have flooded the gemstone markets since 1900s. The earlier version of synthetic alexandrite was made from mineral corundum laced with vanadium or chromium for color changing property.

Since this process is costly, the resulting gemstone also carries a high alexandrite stone price. If you are looking for a natural stone, prefer buying it from a reliable store only.

Alexandrite May Have Chatoyancy

Chatoyancy is an optical occurrence when a white stripe is visible in the middle of a gemstone making it appear like a cat’s eye. If you move this stone under florescent lights, this thin white stripe under its surface will also move along.

That’s how the gemstone experts describe cat’s eye effect in the stones. A few gemstones have this property and alexandrite happens to be one of them.

It is Cut into Faceted Shapes

Alexandrite is mainly found in carat weight less than 2 carats. Hence, cutters usually tend to give it a round or cushion shape to avoid wastage and to enhance the pleochroism in the stone.

Due to its unique color advantage, alexandrite is set as a centerpiece in any jewelry item. Round and cushion cuts suit this setting while showcasing its beauty in complete splendor.

As a member of chrysoberyl family, alexandrite shares many attributes with its siblings. Hardness is one of them. The stone is extremely hard with a rating of 8.5 on the Moh’s scale.

The hardness makes it suitable for intricate craftsmanship in precious jewelry. Artisans can create stunning designs around this gemstone set in a robust metal. Only, the precious gemstones like diamond, sapphire, and ruby are harder than alexandrite.

The Largest Alexandrite is in Smithsonian Museum

The Smithsonian Museum in Washington DC houses the largest faceted alexandrite in the world. It weighs 66 carats and was mined in Sri Lanka. It is an amazing specimen with bright green and red colors adorning it under different lights.

The largest gem-quality uncut alexandrite was found in 1967 in Bahia, Brazil. This gemstone weighs 122, 5400 carats and it is named Sauer Alexandrite.

Alexandrite is Expensive than Sapphire and Ruby

Though sapphires and rubies are touted to be the most exclusive gemstones, they do not beat alexandrite in terms of price and value. This beautiful gemstone is rarer than diamonds and pricier than rubies, sapphires, or emeralds.

The natural alexandrite price for an untreated single carat stone can range from $20,000 to $35,000. The prices are usually determined as per strength of pleochroism effect and purity of color in the stone.

The beauty and charm of alexandrite aren’t limited to outwardly appearance only. This stone, rather, has amazing metaphysical properties as well. It is symbolic to the 45th wedding anniversary and it is also the June birthstone.

Alexandrite is believed to bring immense love and unprecedented success in the life of its wearer. It can lead to a long married life and successful professional career as such. Also, it boosts the self-confidence and balances emotional feelings in a person.

Many ancient legends also describe it as a good omen that can foretell any impending events with its color change. If it turns yellow, this is apparently a sign of hard times in the future. Also, legends consider it a traveler’s gem that helps its wearer in adapting to changing environment and culture.

With its cosmic powers, it can change the life of its wearer. But, you should be cautious and buy only a natural alexandrite stone from sellers like Gempundit. They support the precious stones with a lab certificate and easy returns to validate their authenticity.

Apart from its ability to change fortunes, alexandrite is also known to benefit in treatment of several diseases. The stone aids in curing problems related to pancreas, spleen, and lymph nodes. Also, it can help in the treatment of leukemia when supported by conventional medicines and procedures.

These are some interesting facts that you should know about the precious and unique alexandrite stone. When looking to invest in this prized possession, take your time to research about your options and know more about the quality of the gemstone you buy.