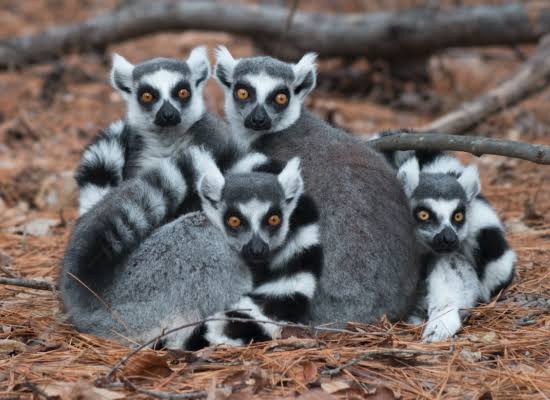 Lemur monkeys or lemurs are exotic animals that are native to the island of Madagascar, which is off the southeast coast of Africa in the Indian Ocean. Others are found in neighboring Comoros islands. Lemurs are divided into different species. Some of which are found in habitats, which are as different as the lush and wet rainforests of the eastern part of Madagascar and the dry spiny desert found in the southwest.

Lemur monkeys are called so because they are primates. The species that lives on today are small to medium in size mammals that range from the smallest primates, which is the tiny pygmy mouse lemur, which weighs around 1 ounce or 30 grams to the largest variety, which is the Indri as well as the diademed sifaka which weighs slightly over 15 pounds or 7 kg and can reach heights of 4 feet or 1.2 meters. Like other types of primates, lemurs are also equipped with grasping hands and binocular vision. However, they have a slightly unique characteristic that sets them apart from other kinds of primates. This would be their rhinarium, which is a moist and very sensitive nose. All varieties of these animals except for the indri have long and furry tails, which they use for balance. Balance is very necessary when they are leaping through the forest canopy. However, their tails are not prehensile like those found on new world monkeys, which is why they can’t hang from trees using these.

Let’s look at how these unique animals came to be. The answer to how and when these primates diverged from the lineage that led to the birth of monkeys is still unclear. However, it was once thought that they were on the grounds of Madagascar when it separated from Africa. Advancements in geological science have proven that these exotic animals only evolved after Madagascar separated by hundreds of kilometers from Africa. Accordingly, the very first groups of these animals must have crossed from Africa through the help of floating vegetation during the early part of primate evolution. Through which, they became reproductively isolated from Africa.

There are over 88 species of lemurs today. They are divided into five major families namely Cheirogaleidae, Lemuridae, Megalapidae, Indriidae, and Daubentoniidae. The Cheirogaleidae family is composed of mouse and dwarf lemurs. This family is known have the smallest variety of all primates, which is the gray or lesser mouse lemur. These are nocturnal in nature. They are known to be solitary foragers but they sleep in small groups. The Lemuridae family on the other hand is composed of a group of true lemurs such as the ring-tailed and red-fronted species as well as the red-ruffed species. These primates are known for their long and bushy tails, which they use for balancing when they jump from one branch to another.

The Megaladapidae family is composed of sportive varieties that are both arboreal and nocturnal. They mainly feed on leaves. The Indriidae are woolly species and are the largest among all the families. Lastly, the Daubentoniidae is composed of the rare aye-aye.