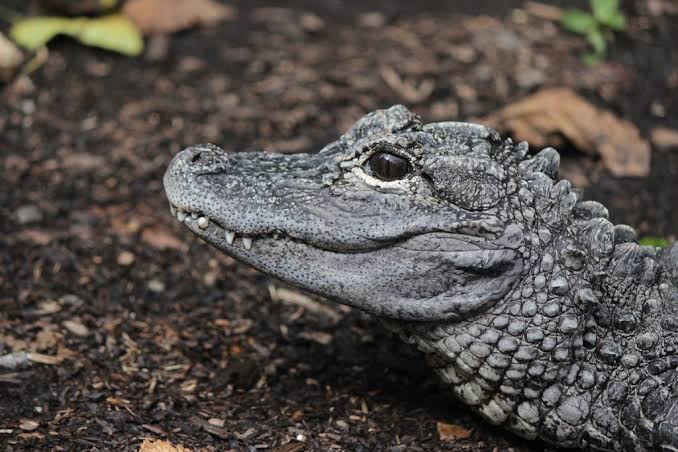 People are aware of alligators’ presence in wetlands of Florida and other Central-American sites, Africa and on some archipelagoes in Oceania. Regardless their popularity in zoology, another alligator’s species has been outranged – Chinese alligators, which are probably less known due to the fact they are soon to be extinct animals. These animals are small alligators, body length of which is not over 2 meters. Adult animals can reach a weight of 40 kg. Young alligators are black with bright yellow stripes crossed that resemble a coat of young alligators, which have more such bands.

The other distinctive feature of Chinese alligators is their diet that is comprised mainly of mollusks and shells. Therefore, the structure of their teeth and chaps differ. In particular, end of the muzzle is slightly strung up, and their teeth are more powerful, adapted for cracking shells. Like other alligators Chinese species has bone wall in the olfactory cavity, but no bone belly armor.

According to scientific American, Chinese alligators are soon to be extinct animals. In fact, the rarity of their population is caused by constant destruction of their essential habitat, including drying wetlands and construction of dams. Specifically, the area of alligators’ distribution embraces the lower Yangtze River in the provinces of Jiangsu, Zhejiang, and Anhui. On the contrary, some crocodiles are met on the settled by humans lands, so animal-human clashes are obvious. In most of the cases they occur when crocodiles attack domestic ducks in nighttime. One may ask about attacks on humans and if they are scared of such a horrifying neighbor? Indeed, Chinese are pretty afraid of these crocodiles, but not due to its wild nature. To be more specific, Chinese alligators are associated with mythical Chinese dragons.

Nevertheless superstitious fear does not obstruct hunting alligators and using their organs in traditional Chinese medicine and serving crocodiles’ meat in restaurants. Perhaps, these are the main reasons why scientists agree this species is soon to be extinct animals. Many actions were taken to preserve and enlarge the population of Chinese alligators. One of them was breeding and animals’ release into the wild. Anhui Research Centre of Chinese Alligator Reproduction and the Madras Crocodile Bank have performed it nearly eight times, which resulted in letting go of 48 Chinese alligators. In 2006-2011 42 alligators were bred in the conservation and started to lay eggs in 2008. Breeding is likely to be the best way of reviving species’ population, as these animals easily adapt to new environment.