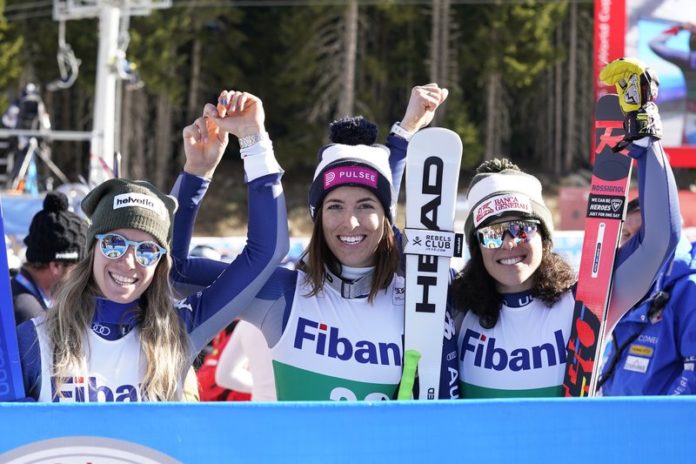 Elena Curtoni led an Italian sweep of the podium at a women’s World Cup downhill on Saturday for her first career victory, while Mikaela Shiffrin placed fourth.

A late starter with bib No. 28, Curtoni benefited from improving visibility as the sun came out on the technically demanding Marc Girardelli course.

It helped her to beat Marta Bassino by 0.10 seconds and Federica Brignone by 0.14, respectively.

It was the second time in the 53-year-history of the World Cup that the Italian team took the top three spots in a women’s downhill.

The previous time was two years ago in Bad Kleinkirchheim, Austria, when Sofia Goggia won ahead of Brignone and Nadia Fanchini.

Curtoni had been on a World Cup podium three times before, but not since coming runner-up in a super-G in Crans-Montana, Switzerland, in February 2017.

Later that year she tore the ACL in her right knee in a training crash at Copper Mountain, Colorado.

“It took me almost two years,” Curtoni said about working her way back.

“I dedicate this historic victory to all those who have been close to me, but I have never lost my smile, even in the moments of greatest despair,” she said. “Probably today it was destined to end like this, even my parents decided to come here.”

Her winning run Saturday bumped Shiffrin off the podium.

The three-time overall champion, who won a downhill on the same course Friday, finished 0.35 behind, with her American teammate Breezy Johnson 0.12 further back in fifth.

“I was pushing really hard,” Shiffrin said. “I felt like in some spots today the speed was a little bit higher. So I wasn’t taking like crazy risk but my skiing felt good.

“I am really excited and really proud how I skied the last couple of days,” she added.

Shiffrin closed the gap to leader Corinne Suter in the season’s downhill standings to 16 points. The Swiss skier finished the race in ninth.

Shiffrin leads the overall standings and is 270 points clear of Brignone, with Petra Vlhova of Slovakia 335 behind in third.

Joana Haehlen of Switzerland, who earned her first career podium in Friday’s race, skied out and slid into the safety netting but seemed unhurt.

The speed events in the Bulgarian resort will be concluded with a super-G race on Sunday.