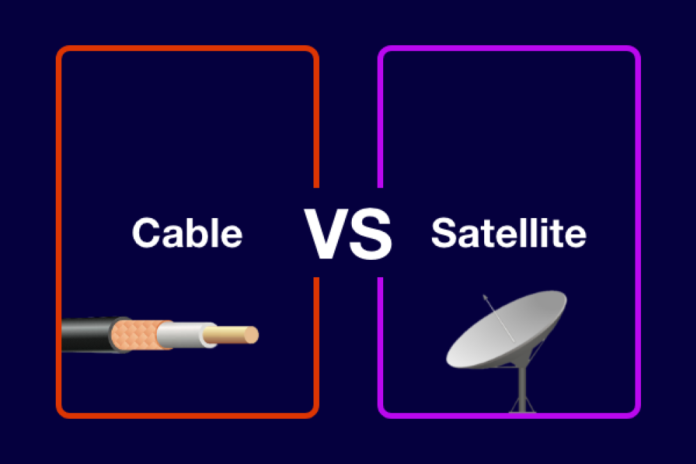 The battle between cable and satellite is a tricky one. Major differences between the two lie in the equipment and pricing mostly, whereas other features are generally comparable. Good were the times when things were easier, a couple of decades ago, when internet transmission was done via a single channel. Subscribers never had to go through the confusion of choosing among multiple providers or different mediums of transmission, or the hassle of all the research one has to do now. You simply searched for “internet in my area”, and the only option you had was your local internet service provider and that was the one you went for, that’s it.

If you opt for a cable internet connection then you won’t have to deal with any kind of satellite related issues like weather dependency, is a pertaining belief among masses. This is nothing but a myth. The only difference here is that in satellite internet subscription, the dish is installed at your house, whereas in case of cable subscription that dish is installed on the company’s roof which is later transmitted via cables to households and businesses. However, both of them are equally susceptible to weather conditions.

In the case of cable internet, the equipment needed is all the wiring, an external receiver box, and a wireless router for the Wi-Fi. Most of this equipment is concealed in a way that no one can tell. Satellite on the other hand is installed on either your rooftop or the side of your building where you have to ensure unobtrusive signal reception for it and it can very easily be damaged by weather changes, fast winds, heavy hail or a stray basketball.

Cable equipment is designed to offer greater flexibility with lesser equipment and visual mess, that too with a singular outlet, a concealed coaxial cable and a set-top box. If your living unit is a small one, cable is your way to go, as you won’t have to worry about space issues.

Satellite internet, on the other hand, requires you to install a dish on your rooftop with uninterrupted exposure to the southern sky. You’ll have to ensure it doesn’t encounter debris too often or that could interrupt your internet transmission.

In short, cable because of its lesser technical considerations can possibly have a longer lifespan as compared to a satellite setup.

Pricing and bundling appear to be designed to induce confusion to the user, trust me I feel the pain. Hands down, skimming through hundreds of pricing and package details and deciding on the right one for your home is a daunting chore, no doubt!

The difference arises where most cable providers don’t ask for a long term commitment when it comes to subscribing for a plan, satellite providers on the other hand demand at least one or two years of subscription commitment. Cable internet also happens to have a better price per month as compared to satellite internet.

Cable internet is the more reliable one among the two, since the medium of signal transmission is a physical cable, which is less susceptible to minor changes in weather, as compared to satellite internet in which case, the signal travels via air and can easily be disturbed by humidity or electric discharges. However, there are instances when your satellite internet keeps working while the cable internet fails to support you, because the latter is dependent on your local cable provider, whereas the former depends on a remote satellite.

Cable internet is available at all locations served by cable TV, making it available to a significant majority of the population. Satellite internet on the other hand is rather omnipresent. It is available in the remotest areas where there is no access to cable or wiring infrastructure. Satellite being a lesser-known alternative, is a lifeline for people living in remote or rural areas offering broadband internet to keep them connected to the outside world.

The bottom line is that satellite internet’s availability is its biggest strength, whereas cable internet, if accessible at your location, offers a great blend of prices, packages and services.

Business graduate, writer, digital marketer, traveler, Interior design enthusiast, and a proud dog parent. She shares her expertise and writes for businesses to improve their rankings on Google. Probably one of the most amazing things about her is her ability to stay relevant. Her work has been posted on multiple blogs and e-zines across the web. Find her on twitter.