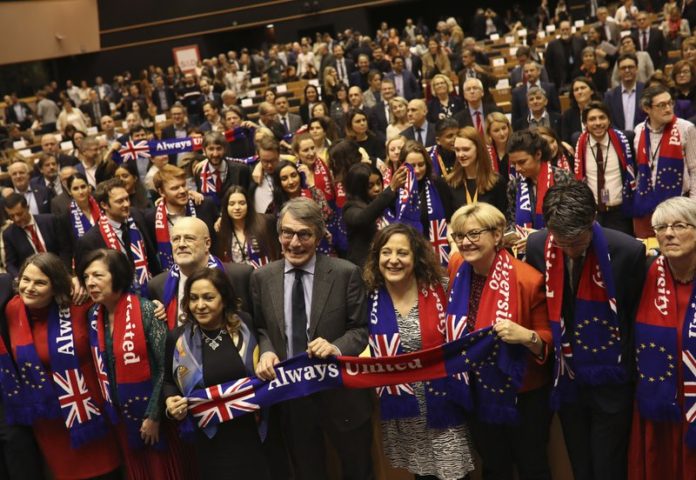 The European Union grudgingly let go of the United Kingdom with a final vote Wednesday at the EU’s parliament that ended the Brexit divorce battle and set the scene for tough trade negotiations in the year ahead.

In an emotion-charged session at the session in Brussels, lawmakers from all 28 EU countries expressed their love and sadness, while some, notably from Britain’s Brexit Party, their joy.

Some even cried and many held hands during a mournful rendition of the Auld Lang Syne farewell song that contrasted sharply with hard-headed exhortations that Britain won’t find it easy in the talks that will follow the country’s official departure on Friday.

“We will always love you and we will never be far,” said EU Commission President Ursula von der Leyen.

Britain will leave the EU after 47 years of membership. It is the first country to leave the EU and for many in Europe its official departure at 11 p.m. London time on Friday, Jan. 31 is a moment of enormous sadness and reduces the number in the bloc to 27.

With just two days to go until Brexit day, the legislature overwhelmingly approved Britain’s departure terms from the EU — 621 to 49 in favor of the Brexit deal that British Prime Minister Boris Johnson negotiated with the other 27 EU leaders in the fall of last year. The deal’s passage follows last week’s backing by the U.K.’s Parliament.

The parliament’s chief Brexit official, Guy Verhofstadt, said that “this vote is not an adieu,” adding that it is “only an au revoir.”

Though the deal on Britain’s divorce terms has cleared its hurdles, there are still huge uncertainties around the future relationship. After Britain’s departure on Friday, a so-called transition period will begin during which the U.K. will remain within the EU’s economic arrangements until the end of the year though it won’t have a say in policy as it will not be a member of the EU anymore.

“That’s it. It’s all over,” said Nigel Farage, who has campaigned for Brexit for two decades. On departing the scene, the man who arguably did more than anyone else in the country’s decision to vote for Brexit in the June 2016 referndum, waved Britain’s Union Flag.

EU countries are preparing for the possibility that talks on a new trade deal with Britain could collapse by year’s end, and no-deal contingency planning for a chaotic end to the transition period is necessary.

Britain is seeking to thrash out a comprehensive trade deal within 11 months, a timetable viewed as ambitious by many observers of trade discussions, which can often drag on for years.

“We will not yield to any pressure nor any haste,” French President Emmanuel Macron said in Paris. “The priority is to define, in the short, medium and long term the interests of the European Union and to preserve them.”

The EU has said such a timespan is far too short and fears remain that a chaotic exit, averted this week, might still happen at the end of the year if the transition ends without any agreement in place.

Von der Leyen said the precondition to granting the U.K. advantageous entry into its single market of almost half a billion consumers is that “”European and British businesses continue to compete on a level playing field.”

“We will certainly not expose our companies to unfair competition. And it’s very clear the trade-off is simple. The more the United Kingdom does commit to uphold our standards for social protection and worker’s rights, our guarantees for the environment and other standards and rules ensuring fair competition, the closer and better the access to the single market.”

Sticking to EU standards however is anathema to the Brexiteers who wanted to be free from any constraints imposed by Brussels.