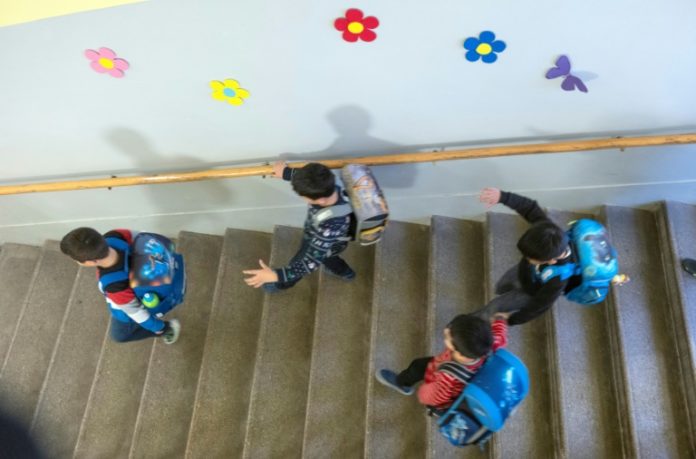 Every morning Abulrahman leaves his normal primary school lessons in Vienna and joins about 20 other children for three hours to learn to read, write and speak German.

Only when his level is deemed good enough will the eight year-old, who arrived from Yemen in July, be allowed to stop what critics call the “ghetto classes”.

Despite conservative Chancellor Sebastian Kurz’s new coalition partners, the Greens, having expressed concerns about the controversial policy, it looks set to continue.

Kurz has pledged to maintain his anti-immigration reforms — with junior partner, the Greens, conceding — including the special classes, which the government argues allow children with weak German skills to learn at their own pace without holding others back.

“It is a way of preventing the permanent exclusion of pupils unable to follow due to a lack of language skills,” said Education Minister Heinz Fassmann, who also held the portfolio in Kurz’s previous coalition with the far-right.

That anti-immigration alliance broke apart in May amid a corruption scandal that engulfed the far-right.

Some 6,300 children across Austria are now enrolled in the language classes.

The country of 8.8 million inhabitants has been a magnet for those from poorer nearby European Union members, such as Hungary and Romania, looking for work.

Since 2015, more than 180,000 people have also sought asylum, as part of a larger movement of those fleeing war-torn countries seeking refuge in Europe.

Ahead of the language classes being introduced in 2018, a survey showed that more than 80 percent of respondents were in favour of the plan, which differs from many other European countries where newly arrived pupils are fully immersed in the regular school system right away.

However the classes now divide opinion.

While some fear that too many non-German-speaking foreigners in class will dilute the level and speed of learning, others slam the reform as a regressive measure, in a country previously known for inclusive housing and other policies.

Sonja Hammerschmid, a Social Democrat former education minister, has said that the classes’ “harmful effects” of stigma and inequality are “ignored for ideological reasons”.

Austria’s teachers’ union has also spoken out against them, saying they are not “viable” and that the decision to introduce them was made without consultation.

And linguist Hans-Juergen Krumm, an expert in teaching German as a foreign language at Vienna University, points to the classes being “a measure of segregation, not integration”.

Kurz’s government with the Greens has stressed that schools have the necessary autonomy to implement and shape how the classes are organised.

Though the Greens have criticised them as “ghetto classes”, they have said that they will accept Kurz’s tough line on immigration in order to fight for environmental protection and other issues.

“I’m learning to write my name, to say the right words,” Abulrahman tells AFP, in still hesitant German at the Felbigergasse school in a privileged district of the capital.

Teacher Katrin Baminger collects him and the others, aged six to 10, from their regular classes just after roll call.

She accompanies the children — originally from Afghanistan, Bangladesh, Hungary, Serbia and elsewhere — to a small, cheerfully decorated room on the ground floor.

There, they learn German before returning to their regular maths, history and other classes for a few more hours a day.

Felbigergasse school head teacher Petra Revay-Schwarz acknowledges that having pupils with no German skills is challenging for her staff.

“The teachers are relieved at the start of the (school) year because they do not have to take care of new arrivals” who are in the special classes, she said.

But she also says that being separated could pose a barrier to learning.

“They would progress faster if they could interact with Austrians,” she tells AFP.

Children are only able to leave the tailored classes after passing a second test, usually after two semesters.

Baminger says that the pupils, who already face the challenge of being in a new country, “are lost and torn between two groups” — the students in their German class and those in their regular classes.

“Many (people) describe these classes as ghettos,” she says, recognising, too, that pupils could end up with gaps in other subjects from missing those classes.

As her son learns the German for “hat”, “gloves” and “scarf” to match the snow outside, Abulrahman’s mother, Amal, says she would have preferred her son “to go with everyone else”.