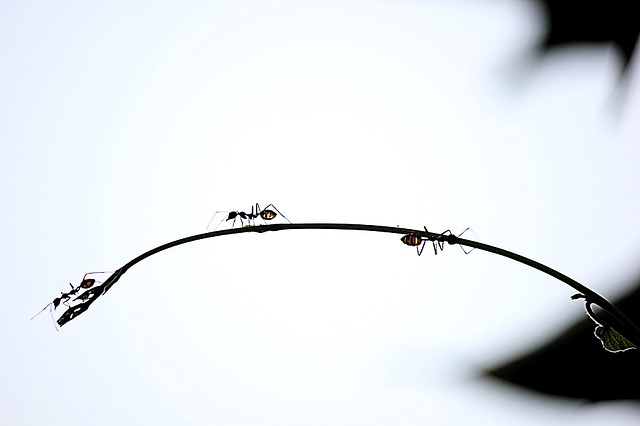 An individual ant is pretty dense and pretty dull. However, collectively ants can perform near-miracles. As a team ants can build their home, protect their colony and some can even farm other insects for food. That is pretty clever. While reading about ants, you can now DIY Pests Control.

So how can a creature that has very little intelligence manage to play its part in the wider team and how can the combined result be so much more than the sum of its parts? The answer is specialisation and communication. Because an individual ant cannot be good at everything it instead is merely good at something.

By having a group of ants that have different skills, tasks can be divided up into bite-sized chunks. By having a good communications system the ants will know where and when to operate.

Depending on the ant variety – there are somewhere between 12 and 20 thousand varieties worldwide – ants can form blocks of marching troops as a way of going to war and attacking prey; leave trails of food for their fellow ants to follow and even leave a diversion trail if the original trail has been blocked.

Lemon Ants will kill plants with their stings in order to make space for their colony. In fact, when it comes to home-making, foraging or fighting, ants are collectively highly organised. There are even ants that capture and protect aphids in order to collect the honeydew that is secreted from their bodies. As well as farming other insects some ants will set up a farm for vegetation. Leafcutter ants collect leaves and cut them up in order to grow the fungus that they like to eat. They can even work out which leaves work best in the fungus production and thus collect the best material.

Ant specialisation includes using their bodies to form bridges for their fellow ants to walk over, using scent or pheremones or even the Earth’s magnetic field or the Sun to navigate. Ant colonies will typically evolve into groups-within-groups. Apart from the caste system they already start with where there are workers and queens, there are typically subdivisions of specialists such as foragers or home-carers or those who rear young or those who are dedicated to looking after the queen.

The analogy to the work-place is too tempting not to mention. A hierarchy is important. However ant colonies do not have a complicated command structure. Much more important is that each ant knows its role and, through devices such as pheromone secretion or touching antennae they are good at mass communication. Thus, rather than reporting upwards through the command chain and then awaiting commands coming the other way, ants communicate directly with each other, making the colony aware of dangers or of food or nesting opportunities.

If you have a large organisation to run or a large project to complete and this requires a lot of people, do not be too proud to consider the lessons that come from these small creatures. Ants are extremely successful, having a presence in almost every country in the world. They have an ability to adapt to their environment and react to circumstances. As long as each ant knows its job and is informed, it will play its part to the benefit of the whole colony.

This is something that has attracted the interest of many companies and even the military. It has been recognised that large groups with a flat command structure can work extremely efficiently and can adapt as they go simply by working and communicating together with little reference to the leaders and commanders. In fact it could be argued that an overpowering and clumsy command structure could hinder work.

I know personally of an organisation that swept away one tier of management – that amounted to over 100 people – and found they got things done more quickly and with improved quality as a result.

Ants are very good at defending themselves. You may think this is more appropriate to the military than to commercial organisations. However, companies can also suffer from commercial predators who will do all they can to achieve an advantage at their competitor’s expense. Ants are equipped with sharp cutting jaws. I am not suggesting the companies start eating their competitors or attack them with knives. However, with ants the theme is that attack is the best form of defence. Surely many companies that have found themselves in a price war have found that an aggressive response is better than meek acceptance.

This ability for ants to defend themselves is great for ants. However, they can also sometimes be pests in our homes and offices. Have you ever returned from vacation to find your home infested with ants? There are many applications that attempt to outsmart ants. Some will tempt the forager ants with a sugary substance that contains a slow acting poison, others use brute force to attack the exoskeleton, the hard outer layer of their bodies.

Luckily ant invasions are quite rare as most of them are happy to forage outside and not in our homes and offices especially if we keep them clean and do not leave open food lying around. This is another lesson that ants have taught us.