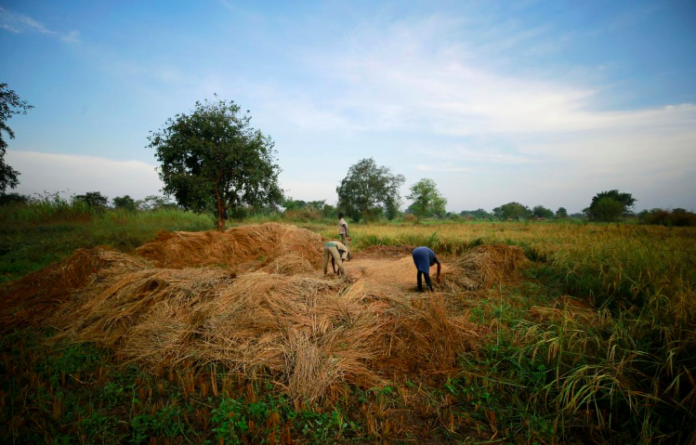 Thomas Tyavwva Maji is planting rice on more of his land in Nigeria’s Benue State than ever to take advantage of a surge in prices since the country shut its land borders in August.

But he says he cannot go much further. With no machinery or irrigation, limited manual labor and no spare cash for fertilizers, the 45-year-old is not expecting any dramatic change in his fortunes.

The constraints Maji faces have bedeviled many rice farmers and millers across Nigeria for years. Despite government measures designed to spur production, farmers in Nigeria get far less from their land than other major rice growers and the West African country is only marginally less reliant on imports.

That’s a problem for a government that wants to grow all of its own food and boost the country’s agriculture, a sector that accounts for nearly a third of gross domestic product in Africa’s biggest economy.

When he came to power in 2015, Nigerian President Muhammadu Buhari pledged to help the nation become self-sufficient in rice – once a luxury but now a staple for millions of Nigerians.

In 2015, Nigeria’s central bank banned the use of its foreign exchange to pay for rice imports and has backed loans of at least 40 billion naira ($130 million) to help small-holders boost output. It also banned rice imports across land borders and kept hefty 70% tariffs on imports coming through ports.

In August last year, Nigeria went a step further and closed its land borders altogether to stamp out smuggling, often from neighboring Benin, with rice being one of the main targets.

Buhari’s spokesman, Garba Shehu, said the measures boosted rice production to 9.2 million tonnes last year from 7.2 million in 2015, making Nigeria more or less self-sufficient, though traders can import rice through ports if they pay the tariffs.

Agricultural data specialist Gro Intelligence, however, put Nigeria’s rice output at 4.9 million tonnes in 2019, up 60% from 2013 but well below local consumption of 7 million tonnes.

The U.S. Department of Agriculture, meanwhile, expects Nigeria’s 2020 rice imports to rise 9% to 2.4 million tonnes, in part due to the high cost of unprocessed Nigerian paddy rice and elevated operating costs at mills.

In the markets where most Nigerians buy their food, sacks of Nigerian rice are piled high but imported rice is still available, even though some traders keep the foreign grain under wraps to prevent it being confiscated by customs agents.

Small-scale farmers such as Maji account for 80% of Nigeria’s rice production with a handful of large companies, such as Coscharis Group, Dangote and Olam, growing the rest, according to the U.N.’s Food and Agriculture Organization (FAO).

In Benue state, virtually every aspect of Maji’s farming manual, from planting to harvesting to leveling out roads to take the crop to market.

It’s a similar story on many Nigerian farms, leaving the average yield per hectare at just over 2 tonnes – half the global average and a fraction of Egypt’s 9.5 tonnes a hectare, according to U.N. data.

Experts say there is little hope of improvement without significant investment in irrigation, mechanization, roads and storage. More than 12% of rice is also wasted due to poor roads and inefficient harvesting, milling and storage, consultants KPMG said in a review of the Nigeria’s rice industry.

In a good year, Maji makes about 1.5 million naira ($4,900) – nowhere close to the 5 million, at least, a tractor would cost. Without irrigation, a goal so remote he doesn’t even know the cost, he can only plant one crop a year.

“At this scale, we will not even be able to fetch a tractor. Talk less of fertilizer and other chemicals,” Maji said.

According to the FAO, less than 1% of Nigeria’s farmland is irrigated, compared with a global average of more than 20%.

Small- and medium-scale rice millers, who account for more than 80 percent of the local market, also say they’re struggling to meet increased demand without proper equipment.

Nearby, rice grains that have been parboiled in vats heated by firewood dry on tarps. She said new buyers from across the country had surfaced since the border closures – but producing more would require significant investment in new machines and the higher prices were not enough on their own.

More broadly, experts warned that extreme measures, such as border closures, taken in the name of food security were hurting Nigerians, stunting the development of other industries and holding back foreign investment.

“The border closure has been incredibly disruptive,” said John Ashbourne, an economist at Capital Economics. “It stops industries from getting the imports they need, and it pushes up prices.”

The border closure is set for review Jan. 31 but the presidency’s Shehu said land frontiers would remain shut until Nigeria’s neighbors stopped smuggling on their side – and there was “no sign of compliance yet”.

Ashbourne said even some farming has taken a hit from government policies.

After glass was added to a central bank list of items importers cannot buy with foreign exchange, some tomato paste plants shut because they couldn’t source the jars they needed.

On another farm in Benue State, Abraham Hon, 51, weaves through rows of melons and corn before reaching his rice, the crop that generates the most money.

“The prices look pretty good,” he said, as men cut stalks of rice by hand and laid them in piles on the ground. “We expect more money in the pocket this year.”

But while he and Asan are happy with their increased income, they worry about the impact of higher prices on consumers.

A 50 kg bag of rice can cost as much as 24,000 naira in Lagos – nearly double the price in July before the borders were shut and not far below the monthly minimum wage of 30,000 naira.

And consumers, who already spend more than half their income on food according to the World Bank, are feeling the squeeze.

“We will reach a point where people who are buying rice can’t afford to buy rice. They will look at other alternatives to get energy and get food on their table,” Hon said.

“That in the long term is not in the interest of we, the farmers.”