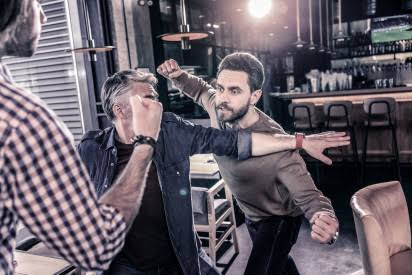 Since most men may be attacked in almost any situation and for a wide-ranging variety of reasons I offer the following advice.

Here is a list of ten simple things that you can do immediately that will increase your safety:

1 – Most men get involved in physical trouble as a result of saying something rude, offensive, tactless, stupid or hurtful. Controlling what comes out of your mouth can keep it in good shape. Think before you speak.

2 – If a fight breaks out in a bar – leave immediately. Go before all the drunks and brawlers start swinging chairs, bottles, glasses and punches. A “free for all” usually starts with just two protagonists. Innocent bystanders often get hit. Those who leave all the fools to bash each other do not.

3 – NEVER attempt to mediate an argument between a man and a woman. Both will cease arguing or fighting with each other and turn on you – the common enemy. If you fear for the woman’s safety, call the police.

4 – Understand that many people these days have a cocktail of drugs and booze in their veins. It makes them argumentative, aggressive and “Mike Tyson-esque.” Avoid people who are “off the planet.” Even a casual glance at them can set them off. Leave them with their own demons.

5 – Don’t make the fatal mistake of thinking that ANYBODY fights “fair” any more. Those days are over – they have been since the John Wayne era! Expect multiple attackers, weapons, possibly both.

6 – The cemeteries are full of dead heroes. Don’t add to their number. Run if you can. There is no shame in avoiding a fight. In fact, running away is smart.

7 – Recognize objects in every room of your home that could be used as makeshift weapons. Home invasion is a growing curse these days due to the unwillingness of our governments to protect their citizens.

8 – THIS IS MORE OF A LEGAL WARNING: Understand that if you allow yourself to be placed in a “compromising” position with a woman, particularly one who is “under-age,” then the woman’s version of events will usually be believed over the man’s version. Do not allow yourself to get into such situations.

9 – Negotiation is a far higher art form than physical confrontation. Do anything reasonable to avoid a fight. NOTHING good ever comes out of conflict. War is proof of that.

10 – When all else fails, your back is to the wall and there is absolutely no other alternative left remember… “it is better to be tried by twelve than carried by six.”

Remember my opening words – “increasing personal safety ALWAYS commences with awareness.” Increase your awareness, mind your manners, know your surroundings and you will certainly improve your safety.