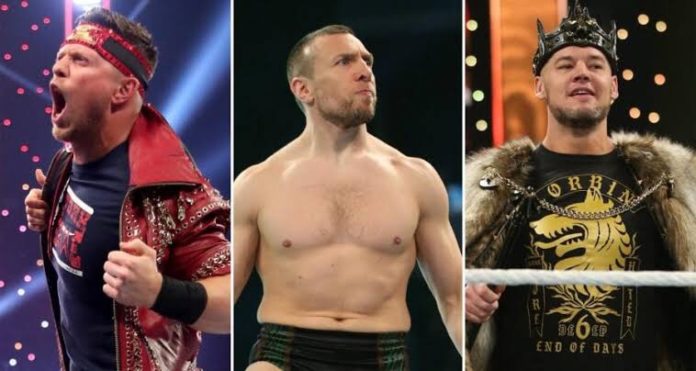 Here are the full results for the December 27th, 2019 edition of Friday Night SmackDown.

We start with Elias singing about 2019 and 2020 as SmackDown kicks off.

Before the match starts, King Corbin calls the crowd bottom feeders and that we do things his way. He says he earned his opportunity at the Universal Championship by defeating Roman Reigns twice since he’s returned, and he shouldn’t have to compete for a title shot. While he’s cutting his promo, Roman Reigns cuts him off and attacks him. He hits a Superman Punch before Corbin escapes. The match never starts.

The New Day and Braun Strowman vs. Sami Zayn, Shinsuke Nakamura and Cesaro

Shinsuke attempts to hit Strowman with a pancake platter, but Kofi takes it and hits from behind with the referee distracted. Strowman hits the running powerslam and pins Shinsuke for the victory.

Kayla Braxton states that Corbin is still refusing to compete, and instead of a triple threat match, it will now be Daniel Bryan vs. The Miz for a shot at the Universal Championship.

Backstage, Mandy Rose and Sonya Deville are backstage. Mandy has a match with Carmella next and she asks Sonya to be in her corner. Sonya asks why she should since she wasn’t there in her corner against Carmella last week. Mandy says that she got sweat on her outfit from Otis last week. Sonya says she’ll come once she signs some programs. Otis approaches Mandy and gives her a homemade fruit cake. He attempts to say something else, but Mandy says she has a match and has to go. Otis remains speechless.

After a series of covers, Carmella wins with the superkick.

We get another Sheamus vignette.

During the match, Corbin’s henchmen comes out and attacks both men, and the match ends in a no contest.

Backstage, Kayla asks what Corbin just did. Corbin says all he did was administer justice. He saves to save her questions for Roman Reigns and ask him why he attacked him before the match to start tonight. Kayla tells Corbin that Roman has been asked to leave the arena, and with that, Corbin says he’d be willing to now compete in the triple threat. Miz and Bryan run backstage while he’s being interviewed and attack his henchmen while Corbin runs away.

It is announced that the triple threat match is now back on.

We have A Moment of Bliss with Lacey Evans. Lacey says that Sasha crossed a line you don’t cross when she confronted her daughter. She says she speaks for every parent when she says you don’t get between mama bear and a cub. Evans says she won’t allow herself to be attacked from behind, and she says she’s ready for a fight, so he’ll wait in the ring.

Lacey Evans and Dana Brooke vs. Sasha Banks and Bayley

Bayley and Sasha are out with Brooke and they have already attacked her. Sasha says she’s a good mother, but a terrible tag team partner. Dana Brooke fights back, and Lacey joins the fight. Referees come out to break things up.

Towards the end of the match, Sasha shoves Lacey into the ring post, and counters a roll-up from Dana Brooke into the Bank Statement for the victory.

Dolph doubts how special it is because he believes Otis probably gave one to everyone. He then asks what a guy like Otis would know about what a girl like Mandy would want. Dolph stomps on the fruitcake before Corbin grabs Ziggler.

We get a Mustafa Ali vignette about his 2019 and his failures.

Backstage, we see Otis and he sees the crushed fruitcake, and he looks sad.

During the match, Roman comes back out and takes Corbin and Ziggler out. It remains Daniel Bryan vs. The Miz for the latter half of the match, and Bryan is able to get the YES lock locked in tight and makes Miz tap out.

After the match, we get Firefly Fun House and Bray congratulates Bryan on the win. He says that he isn’t quite done with him because he remembers everything. Bray asks if he’s willing to do whatever it takes and let him in. Firefly Fun House ends and Bryan chants YES as SmackDown goes off the air.