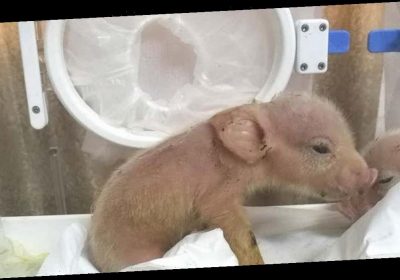 (IANS) In a world-first, researchers have been able to produce pig-monkey hybrids in a Chinese laboratory, a media report said.

Two piglets – having monkey tissues in their hearts, liver, and skin – were born in the State Key Laboratory of Stem Cell and Reproductive Biology in Beijing but died within a week, the Mirror reported.

The announcement to this effect was made by Tang Hai. The experiment comes in the wake of Spanish scientist Juan Carlos Izpisua Belmonte”s attempt to create pig-human hybrids two years ago.

Tang and his team injected genetically modified monkey cells into more than 4,000 pig embryos before these were implanted into sows, the New Scientist magazine reported.

Only two of the 10 piglets thus born were hybrids – with tissues in the heart, liver, spleen, lung, and skin, partly consisting of monkey cells.

Experts suspected that the failure has to do with the IVF process.

Critics have now warned that the scientific development will create “disturbing” dilemmas over the ethics of human-animal hybrids.

Doctor Angel Raya, director of the Barcelona Regenerative Medicine Centre, told the Spanish daily El Pais: “What happens if the stem cells escape and form human neurons in the brain of the animal? Would it have consciousness? And what happens if these stem cells turn into sperm cells?”