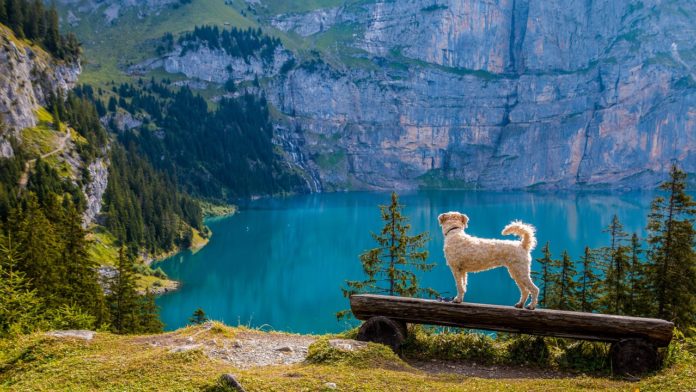 It’s commonly believed that dogs wag their tails to convey that they are happy and friendly, but this isn’t exactly true.

You’re at a friend’s house and along comes her collie, Baby, wagging her tail. Good girl! You bend over to pat her and are rewarded with a growl. What went wrong?

“It is so important for people to realize that a wagging tail does not equal a dog that is friendly or wants to be petted,” says E’Lise Christensen Bell, veterinarian and board certified veterinary behaviorist at Veterinary Behavior Consultations of NYC. “It can, but you are much better off looking at the entire dog. If there are stiffened muscles, dilated pupils, tense facial muscles, or ears pinned forward or back, these are signs that you should back off.”

Dogs use their tails to communicate strong emotions such as agitation, annoyance and anger as well as happiness. A person can get bitten by a dog that’s wagging his tail because he read the signs incorrectly. And make no mistake, there is a science to tail wagging.

Dogs have been wagging their tails since…well, there have been dogs. These furry masses of bones serve multiple purposes. The original purpose of the dog’s tail was for balance. It prevents him from toppling over as he makes sharp turns while running or swimming. The tail also balances him when walking along narrow structures, climbing or leaping. Over time, the tail adapted itself to playing a vital role in communication, particularly when a dog is just walking or standing around.

Puppies don’t come right out of their mom’s womb wagging their tails. The majority of them don’t begin wagging until they are about a month and a half old when they have a need to communicate with their litter mates or mothers.

For example, if there’s too much “rough-housing” between the pups, one of them might wave their tail like a white flag to signal a truce to its litter-mates. As they grow, they wag their tail to beg for food from the adults in their canine family.

When a dog is relaxed, its tail will be in its “natural” position, according to the American Society for the Prevention of Cruelty to Animals.

This natural position differs between breeds. The tails of most dogs, for example, hang down near their hocks, or heels. But pugs have tails that curl upward, and greyhounds have tails that rest slightly between their legs.

If a dog is nervous or submissive, it’ll hold its tail lower than its natural position, and will tuck its tail under its body if it’s scared. On the opposite end of the spectrum, a tail held higher than normal may indicate the dog is aroused by something, while a vertical tail indicates aggression.

A tail held straight out means the dog is curious about something.

The way a dog wags its tail also gives clues about what it’s feeling.