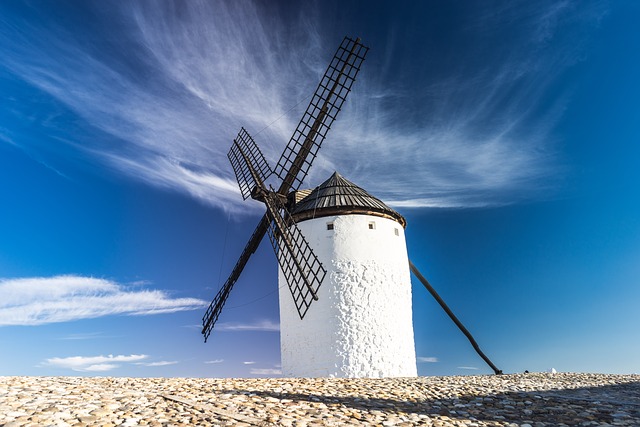 Windmills are basically the machines through which it makes it possible to generate power by harnessing energy from wind currents. If you are thinking that the role of a windmill is quite a new concept then you are wrong! As far back in the middle Ages, windmills were very much in use already, although the application was entirely for different purposes. In those days, windmills were used to generate mechanical energy for the purpose of pumping water for irrigation or for grain grinding.

If we talk from the viewpoint of electric energy, then the first windmill built for this purpose was done in Denmark in the year 1890.

How a windmill works

People who are keen to know how to make electricity through windmills should look into the principle and concept behind the production of electrical power by harnessing the energy of the wind or wind currents. It depends on these 4 basic components:

The base- In order to produce energy on a large scale, it is necessary to create a large base with effective strength. For this purpose, the use of concrete is essential to strengthen the base.

The tower- For the people who wish to learn how to a build windmill, it is necessary to understand the structure of the tower. For better functionality, the tower is must be as tall as possible. In order to offer better stability, the construction of the base is done with thick material and the structure gets thinner as the tower goes up.

The nacelle– It is an object which is helpful in connecting the blades to the windmill tower. The best thing about nacelles is that you can easily purchase them online at a reasonable rate.

So why do we require more windmills?

Here are some very important reasons why we need more windmills, or increase the use of windmills as a means for generating power or electrical energy:

An alternate source of energy– It is a renewable form of energy, so you need not worry about the exploitation of the planet’s natural resources or of the resource running out. Further note that if a resource does not run out, it will not be subject to the law of supply and demand where the price of the resource begins to increase and become more expensive once supply of the resource becomes scarce or is about to be depleted.

Clean and friendly to the surroundings- The extensive use of fossil fuels is hazardous for human beings and the environment. Unlike mining and oil drilling, wind energy is not hazardous to wildlife, oceans, mountains and the coastal plains. According to a report of the U.S. Energy Information Administration, it is the cleanest source of energy available to date.

No environmental damage at all- In regions where the environment is highly prone and sensitive to human activity, generating energy through windmills has no environmental impact. It has no adverse impact on fragile eco-systems.

Reduce global warming- As global warming is a major concern these days, with the help of this clean form of energy one can minimise the impact of greenhouse gases like Carbon Monoxide, Sulphur Dioxide, Nitrogen Oxide and Carbon Dioxide.

Reduce the emission of particulate matter- This form of energy will help in diminishing the particle pollution caused by industrial processing, fires and related activities of fossil-based and traditional power generation systems.

So now, as we know the importance and the benefits to the environment and as a source for renewable and clean energy by generating energy with the use of windmills, it is the time to take this alternate energy source in a serious manner and support its establishment on a wider scale in 2020.