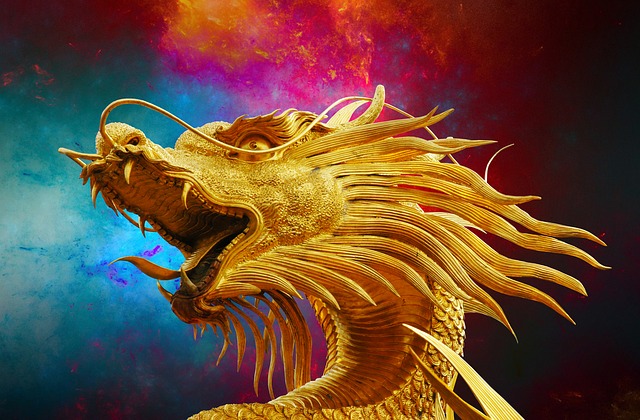 The dragon is a powerful, mythical creature of legend and lore that you can find in pretty much every culture. While the strength of a dragon is a constant in different societies, the appearance and significance is not. Today, many of us adorn our homes and bodies with dragons for their qualities of good luck, well-being, and protection.

In the West, dragons were thought to bring hardships and destruction and often were the guardians of treasure and representations of greed. Societies such as the Norse used the symbol of the dragon as their figurehead, carving dragons into the heads of their ships and placing them on crests and shields. When Christianity was introduced, dragons’ reputations became even worse and they came to be known as satanic beasts.

However, in the East and even in some Western societies, including Celtic, Gnostic, Alchemy, and Draconic Wicca, dragons symbolize a supreme being. This divine creature is believed to represent the spirit of nature and the ability to transform. It offers hope, courage, and good fortune. Legend often presents dragons as the guardians of the “flaming pearl,” a gem symbolizing spiritual perfection. You will often see this pearl in dragon figurines and collectibles. You will sometimes see Celtic dragons in a circular position, tail to mouth. As in paganism, the circle is perfection, the circle of life, transformation, and eternity.

In our modern literature and movies, dragons are portrayed as terrifying, fire-breathing creatures that create obstacles in our personal journeys and that threaten to eat our women and children. Dragons worn with the more Western beliefs symbolize power and freedom and independence, but not usually an intention of evil. Most of the time, when we see a dragon, it isn’t a symbol to fear, but one of protection.

Dragon images are one of the most requested tattoo designs. The inked image represents goodness and honor, power, and wisdom. It may also symbolize magic and a spiritual or personal quest. The actual form and meaning of the image depends on the culture it is from, whether it is Chinese, Japanese, Celtic, Western, Tribal, etc. Once the dragon becomes a permanent part of a person’s body, the power of the dragon becomes a part of that person’s existence. The tattoo also comes to represent that person or a part of that person’s life.

Dragon images make powerful amulets. Worn close to our body, the talisman radiates protection, drives away negative forces, and attracts good fortune. You can wear your amulet all the time, or you can wear it when you feel you need it. You may also carry your amulet or sleep with it under your pillow-it depends on what you are seeking.

Dragon décor is a popular and stylish way to surround yourself with the power of dragons. From collectible figurines, statues, incense holders, chess sets, plaques, goblets, and even a roof cresting, there is a dragon for every part of your home.

Feng Shui has become popular in our Western culture and at the heart of this practice is the dragon. There are specific guidelines in this ideology when placing dragons around your space, including how many dragons you should have in the room, so if you are practicing Feng Shui, go easy on the dragon décor.

To sum it up, dragons are believed to be the protector of treasure, spiritual or material, is also a powerful protector and bringer of fortune in the human realm. There are many ways we can bring dragons into our daily lives and a plethora of benefits we can reap from doing so.