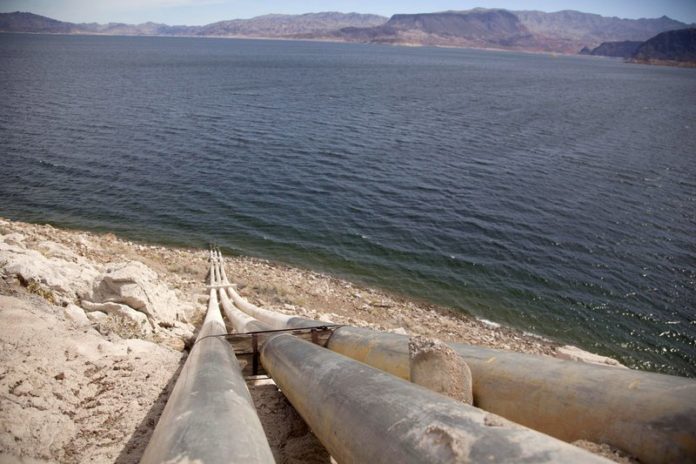 LAS VEGAS — States in the U.S. West that have agreed to begin taking less water next month from the drought-stricken Colorado River got praise and a push for more action Thursday from the nation’s top water official.

U.S. Bureau of Reclamation Commissioner Brenda Burman told federal, state and local water managers that abiding by the promises they made will be crucial to ensuring that more painful cuts aren’t required.

“We need to be proud of what we’ve done,” Burman told hundreds at the annual Colorado River Water Users Association conference at a Las Vegas Strip resort, while also warning of “tougher challenges in the future.”

Arizona, Nevada and Mexico will start taking less water from the river Jan. 1 under a drought contingency agreement signed in May. It followed lengthy negotiations and multiple warnings from Burman that if the seven states didn’t reach a deal, the federal government, which controls the levers on the river, could impose severe water restrictions.

Officials in Arizona and Nevada say conservation measures ranging from replacing lawns with desert landscaping to treating and reusing water that runs down drains mean the cutbacks may not be widely felt.

“Our water use is already well below our Colorado River allocation,” Mack said. “We will be able to make our (contingency plan) contributions without any effect on our water deliveries to our customers.”

Cuts will most affect farmers in Arizona. The Central Arizona Project will stop storage and replenishment operations and cut water for agricultural use by about 15%. The agency gets more than half of Arizona’s entitlement of water from the Colorado River.

The river carries melted snow from the Rocky Mountains some 1,450 miles (2,333 kilometers) to the Gulf of California — running a gauntlet of man-made dams and reservoirs that generate hydropower and meter water to irrigate desert farmlands. It also supplies growing cities including Los Angeles, San Diego, Denver, Las Vegas and Phoenix.

The drought contingency plan is a voluntary agreement to use less water than users are allowed, and its success is measured at the surface level of Lake Mead, behind Hoover Dam east of Las Vegas.

The agreements are designed to prevent a more drastic drought-shortage declaration under a 2007 pact that would cut 11.4 percent of Arizona’s usual river water allocation and reduce Nevada’s share by 4.3 percent. That amount of water, combined, would serve more than 625,000 homes.

California would reduce its Colorado River use by about 6 percent.

Due to a relatively wet winter, Lake Mead is now 40% full and Lake Powell, an upstream reservoir, is at 53% capacity, Bureau of Reclamation spokeswoman Patricia Aaron said. A year ago, the reservoirs were at 43% and 38%, respectively.

Water managers have called the last 20 dry years a drought, but climate researchers warn the river will continue to carry less water in coming years.

“Respected climate scientists have conservatively estimated declines in river flows of 20% by the middle of the 21st century and 35% by the end of the century,” researchers Anne Castle of the University of Colorado Law School and John Fleck of the University of New Mexico wrote in a study released in November.

The report refers to a “structural deficit” under which states and Mexico are promised more water than the river usually carries and encourages the seven states to clarify rules for handling future shortages.

It also notes that guidelines for California, Arizona and Nevada to share water cutbacks expire Dec. 31, 2025.