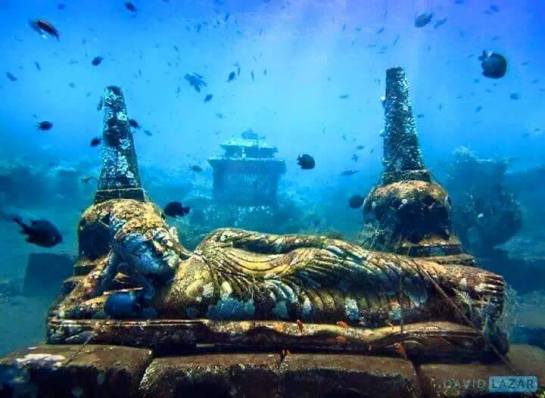 Indonesia in spite of being an Islamic country, 90% of its population follows the culture of Hinduism even more than Indians. Some of the most astonishing architectures and evidence of Hinduism are found in Indonesia proving its Hindu belief. East Asia is the ultimate region where you will find many Hindu/Buddhist ancient temples. The famous ones include Angor Wat (Cambodia) and ones in Indonesia, Vietnam, Thailand, Myanmar, Korea, Japan, China, etc. These temples, dating back many years are mostly in a dilapidated state and efforts are being made to restore them.

Hinduism- one of the world’s oldest Civilizations has placed its traces all over the world. Some of those traces discovered in recent times of technology are unbelievable and are beyond the justification of mankind!

One such unusual temple found in the Island of Bali is a Delight to Human eyes on its own. The ‘Devata Vishnu’ temple is underwater – 90 feet beneath the ocean’s surface near Pemuteran Beach in North West Bali. This amazing Building & Architecture Technology of ‘Sanatan Dharma’ was converted into a Temple Garden in 2005 for promoting tourism in Indonesia.

Recently the Government of Vietnam, despite its official Communist doctrine, has developed many programs and projects highlighting Vietnam’s ancient religious heritage. Its scholarly and Archaeological research and investigations are legitimate and its conclusions are authoritative. This discovery of a 5000- 4500-year-old Vishnu sculpture is truly historic and it sheds new light upon our understanding of the history of not only Hinduism but of the entire world.

A number of stories and pictures circulating online for a few years state that an ancient Hindu Temple was discovered deep in the middle of the sea, off the coast of Pemuteran, Bali in Indonesia. It is also said that the amazing underwater temple was built about a thousand years ago and it was converted into a Temple Garden to promote tourism in the year 2005. The facts claimed about the temple is not a hoax but a fact.

‘Pemuteran is a small coastal village in a town of Bali, 50 kilometers west of Singaraja, Indonesia. Beneath the surface of its calm waters lies the underwater Balinese Hindu temple with a majestic split gate (temple structure) and statues of mythological creatures. The location named as Taman Pura (Temple Garden) was an idea of Chris Brown (affectionately called Pak Nyoman), an Australian who has been dedicated to conserving the natural beauty of Pemuteran village and the well-being of its people.’