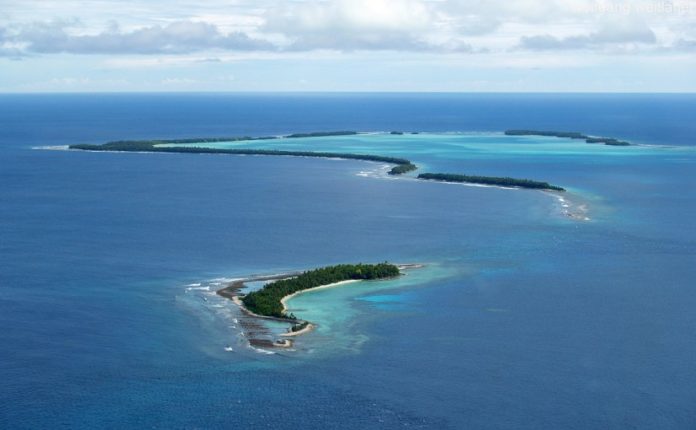 As one of the smallest and most remote nations in the world, this unspoiled corner of the Pacific, Tuvalu, offers a peaceful, and non-commercialized environment that is ideal for rest and relaxation. The spectacular marine environment consisting of a vast expanse of ocean interspersed with atolls, magnificent lagoons, coral reefs and small islands all provide a unique South Seas ambiance.

It is generally believed that the earlier ancestors came mostly from Samoa, possibly by way of Tokelau, while others came from Tonga and Uvea (Wallis Island). These settlers were all Polynesians with the exception of Nui where many people are descendants of Micronesians from Kiribati. There are three distinct linguistic areas in Tuvalu. The first area contains the islands of Nanumea, Niutao and Nanumaga. The second is the island of Nui where the inhabitants speak a language that is fundamentally derived from I-Kiribati. The third linguistic group comprises the islands of Vaitupu, Nukufetau, Funafuti and Nukulaelae. Today, Tuvaluan and English are both spoken throughout the islands. The first European Explorer to make contact with Tuvalu was Alvaro de Mendana y Neyra, a Spanish explorer. He sailed westward across the Pacific in 1567-8 to discover, explore and name a substantial part of the eastern half of the Solomon Islands. On January 16, 1568 Mendana, with his ship Capitana, sighted his first island, which turned out to be Nui, and named it the Isle of Jesus.

In 2000, Tuvalu negotiated a contract leasing its Internet domain name “.tv” for $50 million in royalties over the next dozen years.

Nationals of all Schengen Area states may enter Tuvalu visa-free for a maximum period of 90 days in any 180-day period.

All other nationals will receive a visa on arrival, which is valid for one month. This visa is free for nationals of American Samoa, Antigua and Barbuda, the Bahamas, Belize, the Cayman Islands, the Cook Islands, Fiji, the Gambia, Gibraltar, Grenada, Hong Kong, Jamaica, Kenya, Kiribati, Lesotho, Malawi, Malaysia, Maldives, Mauritius, Montserrat, Nauru, Niue, Samoa, Saint Kitts and Nevis, Saint Lucia, Saint Vincent and the Grenadines, South Korea, Taiwan, Tanzania, Tonga, Trinidad and Tobago, Uganda, the United Kingdom, Vanuatu and Zambia. For all other nations, a AUD $100 fee is charged.

Tuvalu’s capital Funafuti is a tiny coral atoll. The International Airport is located on Funafuti Island.

There is one main road in Funafuti in addition to the runway, which is used for recreational purposes when landings are not scheduled.

Motorbike is the best way to explore the island some costing roughly $10.00 per day.

The other islands are only accessible by boat.

Nanumea is the most northern island of Tuvalu. It is a true atoll and consists of five islands.

Located 106 km to the northwest of Funafuti. The rectangular-shaped island is a true coral atoll.

Traditional local culture remains very much alive, making the people of Tuvalu one of the nation’s best assets. Traditional dancing is performed on special occasions, and the local “maneapa” (the town hall) is your best chances of experiencing one.

The Funafuti Conservation Area on the western side of the Funafuti atoll has some of the best natural sights, and includes reefs, the gorgeous lagoon, channel, parts of the ocean and islands habitats. Its diversity in marine life makes it an excellent place for scuba diving or snorkelling.

The massive stationing of US troops in the Second World War left the island nation with a number of war time remains, including airstrips, bunkers and plane wrecks along the main island of Fongafale and near the village of Nanumea. The tiny island of Motulalo in Nukufetau has an airstrip too, as well as some plane wrecks. If you have any interest in postal stamps, the Philatelic Bureau on Funafuti is a must-see. The Tuvalu Women’s Handicraft Centre at the airport is a good place to see and buy local crafts. If you have time however, try catching a boat to one of the outer islands and admire the local people’s skills in making ornaments, fans, mats, baskets or woodcarvings there.