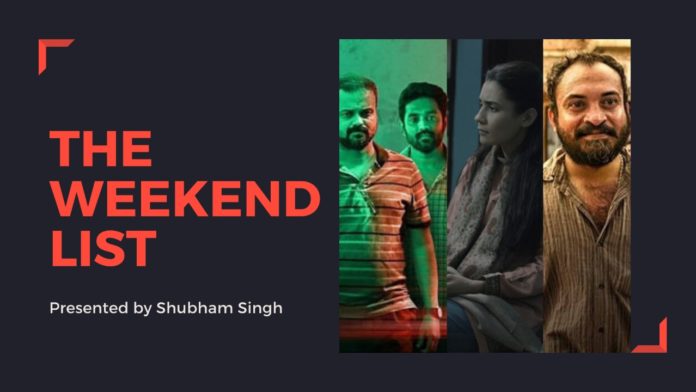 Hey, we are back with our weekly recommendations where we provide you the five best shows/films across the major OTT platforms including MX Player Web Series.

In today’s list there are some of the finest, award winning, underrated films that you need definitely need to stream right now.

Kumbalangi Nights is a beautiful film about love, separation and healing. This endearing story deals with four brothers and their tryst with life.  Though simplistic in plot, the debutant director Madhu Narayanan makes Kumbalangi Nights a visual spectacle laden with super charged emotions. This film tickles your funny bones, makes you nostalgic and leaves you with a warm fuzzy feeling. Highly recommended.

This 120-minute-long drama based on two female cops and their internal battles is probably the best to have come out from Netflix India. Special mention to the leads (Saloni Batra and Geetika Ohlyan) who breathe and live the characters. You can literally see the pain dripping off their eyes. The story deals with a lady IPS Officer and her subordinate who deal with prevalent patriarchy, foul mouthed criminals and their own internal self.

Based on deadly Nipah virus outbreak in Kerala which caused massive epidemic, this film is a story of trauma and survival. Virus (quite literally) grows on you slowly, engulfing like a vice. Perfectly balancing the scientific quotient with emotions, the director Aashiq Abu raises the benchmark of the standard of medical thrillers. Also check out the Best Web Series of Zee5

Do you often feel your mobile is listening you? Do you doubt the credibility of the apps you download? Do you worrywhether your data on the internet is safe or not? Do you think that your government is spying on you? The Great Hack answers all your questions.

One of the finest documentaries available on Netflix, it explores the infamous Cambridge Analytica and the dark side of internet. Told in a very effective way, The Great Hack is an eye-opener and a highly informative piece. Guaranteed, Youwon’t look at your mobile the same way after finishing it.

There are very few movies that have the potential to take you somewhere and create such a magic that you realise you are not the same person that you were when it started. Nil Battey Sannata grips you and goes inside the places where you find goodness and serenity. The magic lies the way you connect to Chanda (Swara Bhasker) andAppu (Riya Shukla), their common fear for maths, their daily struggle for survival and longing for a better future.