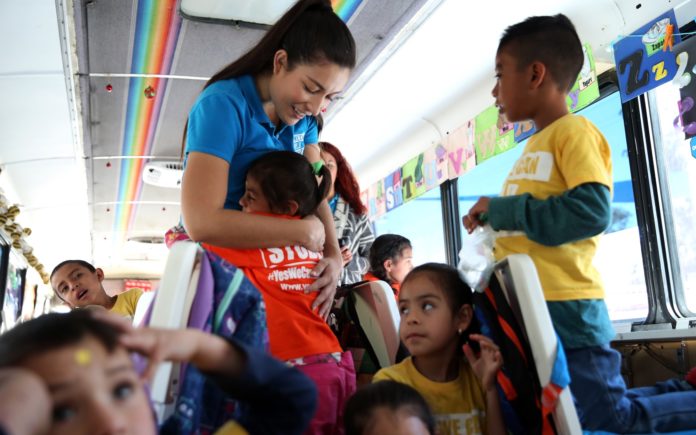 TIJUANA, Mexico – On a cold rainy day in Tijuana, 30 children of families awaiting possible asylum in the United States piled into a bus for a morning of colouring, storytelling and some holiday cheer before Christmas eve.

The Yes We Can World Foundation mobile classroom provides bilingual education and emotional help as the children’s families wait for their asylum cases to be heard – a process that can last months.

“We focus on happiness. We focus on the rights of children and we focus on having a welcoming, safe space where they can just be children,” said Estefania Rebellon, founder and executive director of the Yes We Can World Foundation. Rebellon said she was overwhelmed when she saw migrant caravans arrive in Tijuana earlier this year and in 2018. Her own family had fled violence in Colombia.

“When I was 10 years old and our family had to migrate from Colombia to the United States and seek asylum… school was the only thing that helped me get through. I knew that school was… a survival mechanism for kids,” Rebellon said.The mobile classroom stationed outside the Pro Amore Dei (For the Love of God) shelter serves migrant children between the ages of 5 and 15. It is the first of its kind along the southern border.

FRIENDS AND TEACHERS “When they arrive here, they’re a bit afraid. They don’t know what to expect,” said Sandra Rodriguez, one of the three teachers who started working at the school when the program started in July.A 10-year old boy named Jose told Reuters his Christmas wish was, “I don’t want my friends here to change and I want my teachers to be just the way they are.

“I’m crying of happiness because I have my friends here and they’re much nicer than the friends I had before,” said Jose, whose last name was withheld at the request of the school.”I want to be a pilot and I also what to be a teacher to help children in need just like me,” said Kimberly, 8, with a big smile.The program is expanding to a second shelter in Tijuana aimed at serving 75 children. A third bus will serve children in Ciudad Juarez on the Mexican side of the Texas border early in 2020.A Reuters analysis of government data in October found that since January, the Trump administration has ordered 16,000 migrants under 18 to wait with their families in Mexico for U.S. immigration court hearings. Migrants, mostly from Guatemala, Honduras or El Salvador, were returned to Mexico under a policy known as the Migrant Protection Protocols.