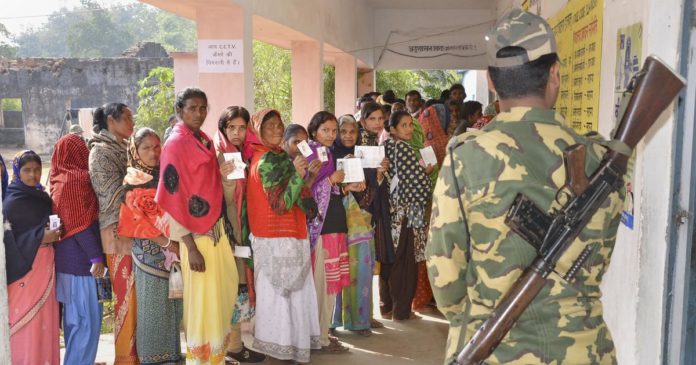 (PTI) Voting began for the third of the five-phase polling in 17 assembly constituencies of Jharkhand on Thursday.

The voting began at 7 am in all the 17 constituencies, amidst a tight security arrangement.

While polling at Ranchi, Hatia, Kanke, Barkatha, and Ramgarh seats will end at 5 pm, voters in the rest of the constituencies can exercise their franchise till 3 pm.

“A total of 56,18,267 voters are eligible to cast votes in the 17 constituencies across eight districts. The voters include a total of 26,80,205 women and 86 third gender voters,” Vinay Kumar Choubey, the Chief Electoral Officer of Jharkhand, said.

The fate of 309 candidates, including 32 women nominees, will be decided in the third leg of the elections.

The assembly elections to the 81-member House began on November 30 and will end on December 20.

CEO Choubey said that about 40,000 polling personnel have been deputed to conduct smooth and peaceful voting.

He said the polling personnel was apart from the deployment of security forces across the 17 constituencies, which have left-wing extremism pockets.

Out of the total 7,016 polling stations set up for the third phase, 1,008 are marked as critical’ and 543 sensitives’ in Naxal-affected areas.

There are 13,504 ballot units, 8,772 controlling units and 9,123 VVPAT in the 17 seats, with double ballot units set up in nine of the constituencies as there are sixteen or more candidates in the fray.

The 17 constituencies, including two reserved for SC candidates and one ST candidate, are spread over eight districts.

While Marandi, the president of Jharkhand Vikas Morcha (Prajatantrik), is contesting from the Dhanwar seat, Singh and Yadav are fighting from Ranchi and Kodarma constituencies respectively.

Former deputy chief minister and AJSU party president Sudesh Mahto is trying his luck to regain Silli’s seat after he lost the 2014 assembly polls and the subsequent bypoll to JMM candidates Amit Mahato and his wife Seema Mahato.

The JMM has re-nominated Seema Mahato.

The BJP has not fielded any candidate from Silli though the NDA allies are fighting the polls separately, for the first time since the state’s creation.

The first-phase polling for thirteen seats and the second-phase for twenty seats had concluded on November 30 and December 7 respectively.

Votes will be counted on December 23.