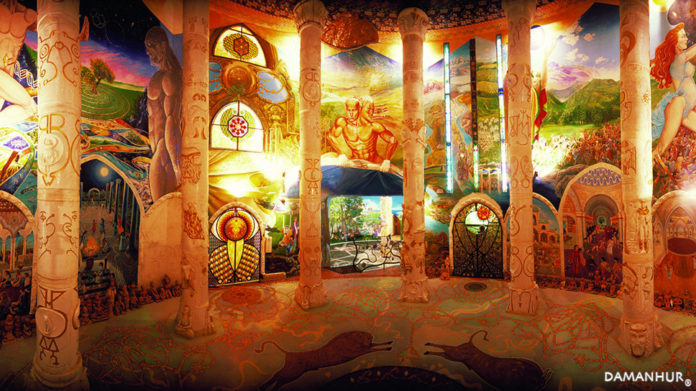 Can you imagine building a structure without someone finding out? That’s exactly how 150 people built the Temples of Humankind, a sprawling spiritual center in Turin.

Have you ever heard of Damanhur? It’s a utopian Federation born in Italy in the 1970s and it lies at the base of Valchiusella, 31 miles due north of Turin. Here live about 600 people from all over the world who call themselves “timely citizens” or “children of Nature”. This small society has a constitution, a currency and a religion of its own. And diversity is always welcome.

Buried in the foothills of the Italian Alps, the amazing Temples of Humankind contain all sorts of wonders, including a four-sided pyramid with mirrored walls, rows of polished spheres, and a room called “The Hall of Water” shaped like a chalice. Despite being underground, some rooms have ceilings that are more than 25 feet high.

But these intricate spaces weren’t built by trained architects or engineers. Instead, followers of Oberto Airaudi, who founded the Federation of Damanhur, built the temples in secret beginning in 1978. In 1992, the Italian government threatened to dynamite the temples upon discovering their existence but ultimately left them alone. Today, they still reside in the Damanhur commune, about 30 miles north of Turin.

Indeed, in Damanhur live people of different ages, coming from different countries and from all walks of life. Here they’re united by their interest in spirituality and appreciation of nature. People who would like to change their life, breaking the social mores and giving up their name, come and join this Federation. Because of its ecological way of living, the chosen names suggest the idea of plants, animals and natural elements. Each man and woman must decide his or her own new name.

In 2005, Damanhur was recognized by the Global Human Settlements Forum of the United Nations as a model of eco-society for its ecological urbanization, use of renewable energies and the right education of the new generations.

One may erroneously believe that Damanhurians are close to native Indians, in harmony with nature and without technological knowledge. But that’s not the case. The Damanhurians are advanced people, friendly to scientific progress, who use the latter to prove that matter is based on energy.

Science merges with spirituality to become one discipline called Selfica, literally “spiral”. Selfica allows you to gather and direct your energy to feel good about yourself and to expand your individual potential.

The temple is carved into the rock, 262 feet underground. Inside there are decorations, frescoes that evoke a magic atmosphere, vast mosaics and sculptures. The structure is broken up into a lot of thematic rooms, which symbolize the human unconscious and the cycle of life. You can visit the temple on your own or with the help of a tourist guide; the latter will explain to you the details of this subculture and will help you find a connection between you and Nature.

This Underground Temple is the Alps’ Best Kept Secret!