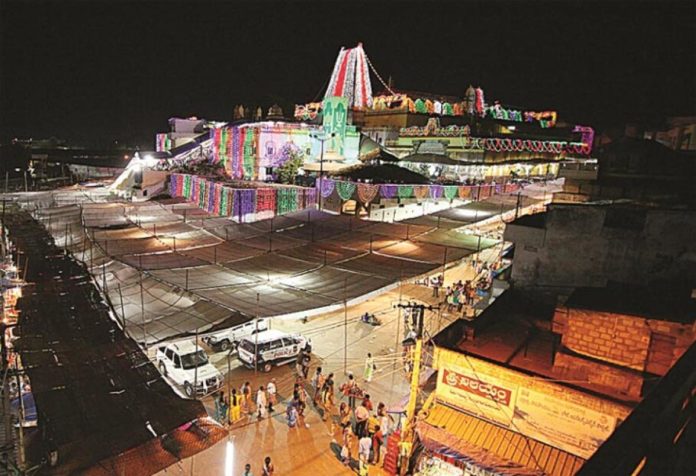 Bhadrachalam or Badradri is called Ayodhya of South.

It is in Khammam Dist of Telangana about 350 Kms from Hyderabad on the bank of River GODAVARI. It has the most famous Rama Temple in South India where Sri Rama is in the form of Vaikunta Rama [only temple in india] along with his consort Sita Maata and Brother Lakshmana.

Sthala Purana – During his 14 years Vanavas, Rama along with Sita and Lakshman lived in banks of River GODAVARI in Dandakaranya. While searching for Sita Maata, he blessed a rock who took human form of Bhadra, son of mount Meru. Rama promised him that he will visit him with Sita after he finds her.

But later Rama forgets his Promise and complete his Ram Avatar and goes back to Vaikunta as Vishnu. Bhadra does the Penance to see Rama Rama comes back to Earth in the form of Vishnu with 4 arms along with Sita in form of Lakshmi and Sesh Nag as Lakshman and converts Bhadra into a hillock with the statues of Vaikunta Rama, Sita and Lakshman.

In 17th Century, a tribal woman Pokala Dhammakka finds these statues in an Ant Hill and with the help of the villagers, Dhammakka constructed a mandapam (hall) and offered prayers to the deities. At that time, Bhadrachalam has a Tehsildar Kancharla Gopanna. During the reign of Abul Hasan Qutb Shah, he worked to collect Jiziya tax. Jiziya was the yearly tax levied on Dhimmis {non muslims subjects in Islamic land] as a punishment for not converting to Islam.

Islamic rulers also levied another tax called Pilgrimage tax on Hindus for visiting Hindu temples. The Agricultural tax was also very huge so that Hindus stay poor and won’t rebel against Islamic rule. Gopanna used to fee bad collecting these taxes from fellow Hindus. Once, he saw Lord Rama being worshipped in a dilapidated temple in Bhadrachalam and took a vow to build a grand temple for Rama.

Gopanna was a great Singer Musician. He is one among the famous Vaggeyakaras (a person who not only composes the lyrics but also sets them to music; vāk = word, speech; geya = singing, singable; geyakāra = singer) in the Telugu language. Other famous Vaggeyakaras in Telugu literature, includes Annamayya, Tyagaraja, Kshetrayya, and Shyama Sastri.

Due to his singing he came to be known as Bhakta Ramdas. He collected donations by travelling across the Andhra by singing songs. With those donations, he built the great Bhadrachalam temple and got lot of grand jewels made up for Rama, Sita and Lakshmana. He spent 6 lakh Varahas on this.

But during the last phase he ran out of money and the villagers asked him to use the Taxes to complete the temple and they will repay it during next harvest.

So he used some part of taxes and completed the temple. Meanwhile Nawab came to know about his temple and he thought Ramdas has built the temple with taxes and hence he jailed him in Golconda Fort in Dungeon. He didn’t listen to RamaDas that he used only small part of it and he will repay it in next harvest season.

RamDas was put in a huge dungeon [We can see that scary dungeon even today in Hyd] and tortured for 12 years. At that time, RamDas wrote some amazing Devotional Songs on Rama. In one song, he asks Sita Mata to tell Rama to rescue him.

That is the greatness of Devotion of Hindus and God. It is pure bliss and love. There is no fear of god like in Abrahaminc religion. Hence God fearing Hindu is an oxymoron. It is God loving Hindu.

After 12 years, one night, Rama and Lakshman appear before Nawab and repay him the money. Then Nawab realised the greatness of RamDas and released him from prison.
From that time, Hyderabad Nawab used to send Gifts to Bhadrachalam temple on SriRama Kalyanotsava and this is continuing even today. Ramdas come back and spreads Rama Bhakti in all of southern India and legend says he ascended to heaven in Chariot sent by Rama.
Tyagaraja the greatest exponent of Carnatic Music was inspired by Rama Das!

Thus spread the Rama Bhakti tradition in South India. Mulayam Yadav, the joker who says South India doesn’t pray to Lord Rama should know that Rama Navami is celebrated for 9 days in Andhra. Tyagayya Ramdas have sung thousands of Rama songs and there is no Carnatic music without Rama and his songs.

Every year Bhadrachalam celebrates SriRama Kalyanam during Rama Navami. Lakhs of people fill the town with chants of Jai SriRam. Whole town is decked with Lights and becomes like Ayodhya when Rama came back to Ayodhya with Sita. Hence Bhadrachalam is called Ayodhya of South.

But, it is so sad that Rama doesn’t have temple in his birth town

Ps – There are two movies made on Bhakta Ramdas in Telugu. One is old B/W classic made by C Nagaiah (Bhakta Ramdas). Another is made by Nagarjuna (Sri Ramadasu)
Both are wonderful movies especially for the great music and awesome acting by lead actors.