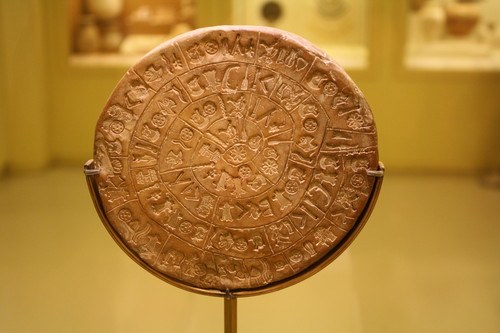 Thanks to the Rosetta stone, modern archaeologists were able to translate Egyptian hieroglyphics. Thanks to the Popol Vuh, we understand ancient Maya writing as well. But some mysteries still remain. Just like the Voynich manuscript, the disk of Phaistos is a mysterious work of unknown origin, purpose, and meaning — and it was written about 4,000 years ago.

Before the Greeks, there were the Minoans. Named (wrongly) after the legendary king Minos by 19th-century archaeologists, this artistically inclined civilization ruled the island of Crete for about 600 years, from around 2000 to 1400 B.C.E. Their most notable surviving monument is the enormous Bronze Age palace of Knossos, but many of their creations set them apart from their peers. The Minoans were the first known civilization to create art depicting natural scenes without human figures, and their palace-building prowess was beyond compare for their time. Centuries later in 1908, it was at the Minoan palace of Phaistos that an expedition turned up a mysterious piece of history that defies explanation to this day.

The Minoan language is a bit of a mystery in general, but it’s known to have predated and heavily influenced written Greek. Divided into “Linear A” and its successor “Linear B,” surviving Minoan texts take the form of hieroglyphs carved into clay tablets. But the Phaistos disk isn’t like that. A little more than 6 inches (16 centimeters) in diameter, this singular, circular piece is adorned on both sides with a spiral of symbols — 241 in total, made up of 45 distinct figures. They aren’t Linear A or B. They aren’t even carved into the clay. Instead, they’ve been imprinted using stamps, so every symbol appears the exact same way every time. It’s not like any other form of writing from the period, but it’s also not just a series of pretty pictures. The recurring symbols and the sequential structure strongly imply that this is some sort of readable message. We just don’t know what it says.

Of course, the fact that there’s no translation easily forthcoming hasn’t prevented people from trying. Just look at the Wikipedia entry of proposed solutions. Most recently, linguist Gareth Owens and his collaborator John Coleman rocketed the disk into headlines with what he described as “the best possible reading” of the code: It’s a prayer to a Minoan mother goddess. The 45 symbols aren’t enough to derive a working language, but working from the assumption that the disk is related to Linear A and B, the pair was able to pull out a couple of phonetic words spelling out: “pregnant mother,” “shining mother,” and “goddess.” Finally solved? Not so fast, say other experts.

Says professor of linguistics and archaeology Elizabeth Barber, “Not only is there not enough statistical information for anyone who claims to have deciphered a script for which only 241 [instances of the 45 distinct] signs of non-alphabetic text are known … to prove his claim, but by the same token there is not enough for anyone else to disprove it.”

Whatever the meaning of the disk, there’s one insight derived from the writing that we found incredibly interesting. In “Guns, Germs, and Steel,” Jared Diamond points out how whether technological innovation changes the world or not can depend entirely on its context. In a very real sense, the Phaistos Disk is the earliest known example of a movable type. But without other technological innovations, it simply didn’t have the chance to take off. It took another three millennia or so before moveable type would take off with the Guttenberg press.