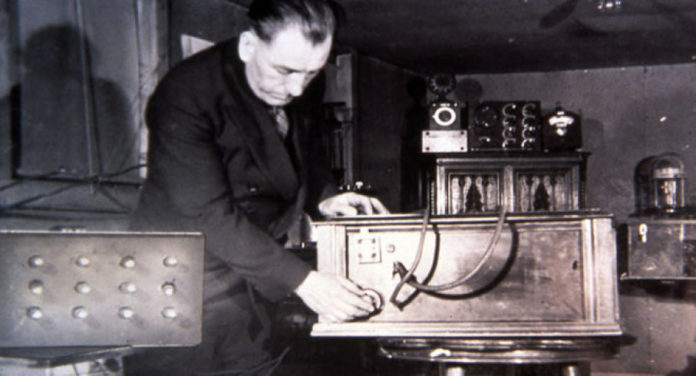 Sometimes, we learn more from our mistakes than our successes. The Michelson-Morley experiment was supposed to be a piece of cake, but instead, it changed basically everything.

Ether You Wind or You Lose

At the dawn of the 19th century, scientists were undecided about whether light was a wave or a particle. In 1801, a physicist named Thomas Young (apparently) settled the debate once and for all with the famous double-slit experiment. By shining a light through two slits cut into a notecard aimed at a wall, Young produced a barcode-like pattern of dark and light bars. If the light source was simply producing a stream of particles, it would have resulted in two slit-shaped patches instead. The pattern was a clear indication that waves were spreading out and interfering with each other.

But that posed a problem, since every known wave — sound, water, stadium crowds — needed some sort of medium to wave through. Since light clearly travels to Earth from the sun, not to mention from the stars and planets, physicists determined that there must be some substance pervading the universe. They called this substance “ether” (sometimes “aether”) and decided it required a number of strange properties. It would have to be something that could be found literally everywhere, but that wouldn’t interact with physical matter at all. (Sound a bit like dark matter? Here’s why that’s different.) By 1887, physicists like Albert Michelson and Edward Morley were convinced that ether only carried light waves, and they set out to design an experiment that would measure it once and for all.

To understand the Michelson-Morley experiment, you’ve got to understand the ether “wind.” Think of the Earth like a car driving on a still, clear day. Even if there isn’t any wind blowing, if you stick your hand out the window, you’ll feel a powerful breeze. Similarly, the ether should be flowing over the planet’s surface at a rate about equal to the speed of the Earth traveling through space.

A River of Doubt

To illustrate the experiment, imagine two swimmers taking a dip in a river that’s 100 feet wide and flows at a rate of 3 feet per second. Both swimmers have a speed of 5 feet per second. The first one, Jacques, swims upstream 100 feet, then turns around and swims back downstream another 100 feet. Because he’s going against the current on the first lap, he only goes 2 feet per second, but he makes up for it on the way back by traveling with the current to go 8 feet per second. That means he does the first 100 feet in 50 seconds, and the second 100 feet in only 12.5 seconds for a total of 62.5 seconds. The second swimmer, Sylvia, travels directly across the river, angling her swim to account for the flow of the river, then turns around and swims back to her starting point. Unlike Jacques, her rate will remain steady — the math shakes out to 4 feet per second. Therefore, it takes her 25 seconds to make both 100-foot journeys, for a total of 50 seconds. Sylvia wins.

The same thing should be true of light traveling through the ether. Michelson and Morley built a device called an interferometer, which uses what’s essentially a one-way mirror to split a beam of light, reflecting half of it at a 90-degree angle down one tunnel and allowing the other half to pass through down another tunnel. Both light beams are then reflected again against mirrors placed at the end of each tunnel. At the end of it all, they’re measured by a detector. (Interferometers may have been new-fangled technology back then, but advanced versions of this exact device were what detected gravitational waves for the very first time in 2015.)

Imagine that one of these light beams is Jacques and one is Sylvia. If Michelson’s and Morley’s hypothesis about ether was correct, currents in the “water” would have led them to travel at slightly different rates, so they should strike the detector at slightly different times. Yet, over and over again, they’d arrive at exactly the same time. Something was fishy in the world of physics.

If you know a thing or two about 20th-century physics, you probably see where this is going. Michelson and Morley couldn’t detect the influence of the ether on light because, of course, there is no ether. Yes, light is a wave, but it’s also a particle. And it always travels at the same speed in a vacuum, no matter what direction you’re traveling relative to its source. These are the foundations of Einstein’s theories of general and special relativity, and the Michelson-Morley experiment is what laid the groundwork for the most influential scientific ideas of the past century. Without their failure to detect the ether, we never would have even realized there was a problem to be solved. It’s just more evidence that science makes as much progress through its missteps as it does through its successes.