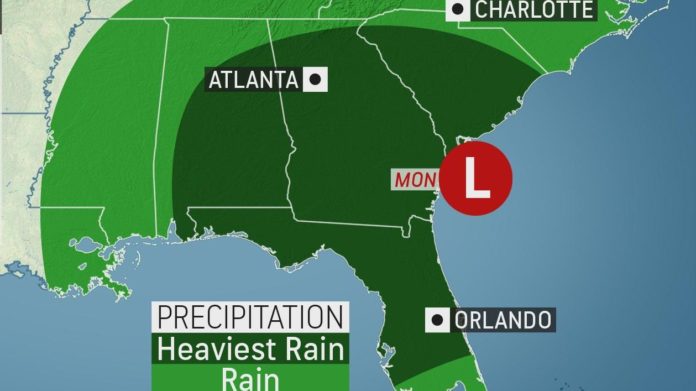 A storm will brew and move slowly across the southeastern United States, packing heavy rain, stiff winds and thunderstorms into early next week.

The combination of wind, rain and cool air from the Southern nor’easter will make for miserable travel and last-minute shopping conditions in the region and could spoil early Christmas vacations for snowbirds.

A nor’easter is a non-tropical storm that produces northeasterly coastal winds. Snow does not have to develop, but rain and rough seas are often characteristics.

“The exact track of the slow-moving storm will determine where the heaviest rain and strongest winds occur but the effects of this storm will be far-reaching over the Southeast states,” AccuWeather meteorologist Courtney Travis said.

Even though parts of the Southeast are experiencing abnormally dry to moderate drought conditions, this storm has the potential to not only cause urban flooding but also trigger flooding in low-lying areas and along small streams.

From 2 inches to 4 inches of rain is forecast from near Interstate 10 to as far north as I-20 and as far west as I-65 in Alabama. An AccuWeather Local StormMax of 8 inches is most likely in southeastern Georgia, coastal South Carolina and perhaps part of the Florida Peninsula.

The early stages of the storm will bring showers to central and southeastern Texas, as well as parts of western Louisiana and Arkansas through Saturday. These areas will dry out later this weekend.

Rainfall will ramp up across eastern Louisiana and Mississippi as the storm organizes along the upper Gulf coast later this weekend. Rain is forecast to extend as far to the north as portions of Tennessee and northern North Carolina as Sunday progresses.

The difference in pressure between the strengthening storm and an area of high pressure along the mid-Atlantic coast will cause winds to increase and become strong.

Strong northeasterly winds will buffet the Southeast coast and will extend well inland. Gusts to 40 mph can occur as far west as the southern Appalachians. An AccuWeather Local StormMax of 55 mph is forecast along the coast from Georgia to North Carolina. Gusts this strong can break tree limbs and dislodge power lines.

The action of wind on the ocean will push water toward the coast faster than it can escape the beaches, back bays and tidal rivers from northeastern Florida to eastern North Carolina and perhaps southeastern Virginia. For this reason, a storm surge is anticipated on the order of 1 foot to 2 feet with local water level departures from normal as high as 3 feet. Water levels this high can lead to coastal flooding on some of the barrier islands, but also on the mainland, including in places such as Charleston, S.C., and Wilmington, N.C.

For those spending time on the beach into early next week, the circulation around the storm will stir the surf. Rip currents will pose a danger as they will be stronger and more frequent than typical beach days from the Gulf coast to the southern Atlantic coast.

High surf advisories are in effect along the east coast of Florida, and they are likely to expand up the Southeast coast in the coming days.

Meteorologists warn that motorists should be prepared for wet weather with poor visibility and excess water on the roads. Traveling at the posted speed limits and close behind other vehicles could be dangerous with the expected conditions.

Enough rain, wind and low cloud ceiling can lead to airline delays, especially at the major hubs of Atlanta and Charlotte, N.C.

Another factor with the storm will be thunderstorms in the warm sector. Thunderstorms are likely to erupt along the immediate northeastern Gulf coast and across the Florida Peninsula, the Florida Keys and the Bahamas.

“Thunderstorms are likely to be heavy and gusty at the local level with the potential for flash flooding and minor property damage well away from the center of the storm,” Travis said.

AccuWeather meteorologists are concerned that some of the storms can become severe and spawn isolated tornadoes and waterspouts.

Regardless of severe weather threats, lightning could pose dangers for those spending time outdoors.

People heading to the Northern states shouldn’t have to worry about the storm following them up like storms of this nature often do.

The northward path of this storm will be blocked by dry air, high pressure and a southeastward bend in the jet stream.

Rain is unlikely to advance very far to the north across Virginia in this setup. Much of the Northeast can expect dry weather with plenty of sunshine and a warming trend over the upper mid-Atlantic, central Appalachians and New England this weekend through Christmas Day.

The storm is forecast to slip eastward from later Monday to Tuesday. Rain will retreat toward the coast and then offshore. Winds and seas are forecast to gradually subside along the southern Atlantic coast from Christmas Eve to Christmas Day.