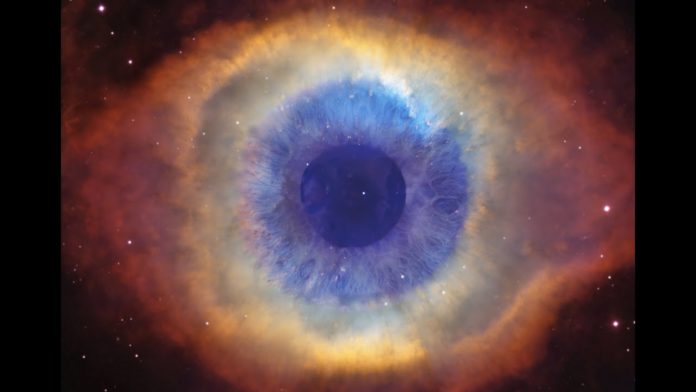 Across the expanse of the universe, there exist arrays of galaxies in colors beyond your wildest imagination. Even here on Earth, our world is filled with stunning hues. As it turns out, though, when you gather up light and color data from across the galaxy, all this wonder boils down into one rather unassuming color.

In 2001, a team of astronomers from Johns Hopkins University spent some time gathering spectral analysis data of young galaxies to study star formation. They hoped to use this information to accurately identify the ages of galaxies across the universe. They ultimately collected spectral analysis data from 200,000 different galaxies, which allowed them to determine that the majority of the stars in the universe formed around 5 billion years ago. However, all this data meant something else too — the researchers could figure out just what the color of the universe is.

By averaging together all of the spectral analysis data, they were able to find a specific glow with a HEX value corresponding to a digital color you might find in a standard graphics editing program. In 2002, these researchers determined the universe was a mellow shade of beige. For all you design nerds, that corresponds to a Hex value of #FFF8E7.

The HEX Value of the Universe

Looking through a telescope seeing the wonder that surrounds us, one might expect that the color of the universe would be maybe a dark red or blue. Maybe even a mysterious green. That simply isn’t the case. This shade of beige wasn’t the researchers’ first decision, either. It was a correction they issued after unintentionally identifying the universe’s color as a light green in 2001.

The beige-ish color of the universe that we’re left with is due to how light from distant stars appears here on Earth. As the galaxies emit light, it has to travel billions of light-years before we can see it here from our blue planet. These light waves tend towards pure white on the spectrum. This color is due to the fact that we are currently seeing the light from the stars’ “youthful” years here on Earth, from when they were new and blue. As these stars age, they’ll turn redder, so the color of the universe will likely change over time as their light finally reaches us.

What Color is the Universe?

This group of researchers also gave the universe’s color a name. Notable names in the running were Cappuccino Cosmico, Big Bang Blush, Univeige, and Cosmic Cream. The team put these names and a few others up to a vote, and Cappuccino Cosmico came out on top — though it didn’t end up as the winner.

“Our favorite suggestion [was Cosmic Latte] because ‘Latteo’ means ‘Milky’ in Galileo’s native Italian,” the authors noted. “So a nice cosmic connection: ‘Via Lattea’ is the ‘Milky Way’ and the color of the Universe would be pretty similar to the color of the Milky Way Galaxy, it is of course just the sum of the light of all the galaxies.”

As for the usefulness of knowing the exact shade of the universe? It’s a nice, easily understood representation of the average color of all the stars, which might otherwise stay hidden in the depths of a dry academic paper. It’s also handy if you want to come up with a new crayon color.

Research in science and the universe sometimes can lead to unsuspecting conclusions, one being that the color of the universe is actually pretty boring. So, next time you look up at the sky and gaze upon the intricacies of the natural world, just remember, you can boil all that wonder down to a shade of beige on your computer screen.