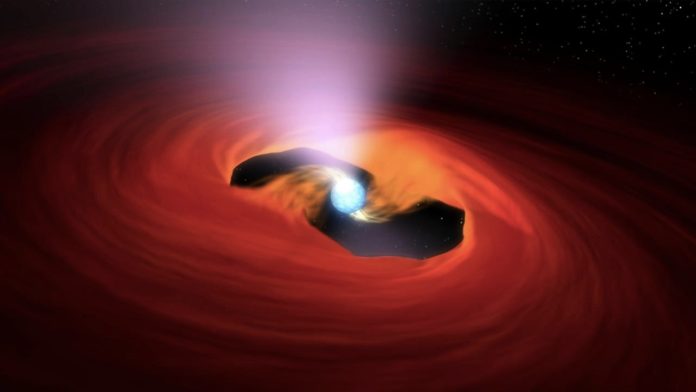 Scientists like to have fun too. Why else would there be a fern named after Lady Gaga, a gene called sonic hedgehog, or a dinosaur appendage named after a Far Side cartoon? Sometimes, however, you’ve just got to name ’em as you see ’em. That’s the case for so-called “nuclear pasta” — it looks like, well, pasta. It may have a silly moniker, but this stuff is no joke — and it could help us delve further into the mysteries of the universe.

To understand why nuclear pasta is so impressive, you have to understand why neutron stars are so impressive. These ultra-dense objects come about when a massive star — we’re talking several times more massive than our own sun — reaches the end of its life and collapses into space the size of a city. The neutron star that results is one of the densest objects in the universe, but its density isn’t the same all the way through.

Neutron stars are made up of several layers, and like the Earth, the outermost zone is known as the crust. It’s made up of the outer crust and the inner crust, and the whole thing stretches about a kilometer down from the surface. Physicists think that atoms at the surface aren’t very dense at all, but the further down you go in the outer crust, the tighter the squeeze until the atoms are so close together that their electrons escape and their nuclei form a tightly-bound lattice structure. Go even deeper into the inner crust, and those nuclei are so tightly packed that they start to arrange themselves into bizarre shapes — shapes that look a lot like pasta.

In a paper published in the journal Physical Review Letters, this is what physicists Charles Horowitz, Andre da Silva Schneider, and Matt Caplan call “the pasta layer.” (We would be remiss if we didn’t mention that Caplan is also the author of a paper about the potato radius of asteroids. Carbs in space!) Some of these nuclear structures are flattened into lasagna-like sheets; others stretched into strands like spaghetti. You’ve got your dumpling-like gnocchi and your tube-shaped bucatini. You’ve even got antipasta: antispaghetti is nuclear matter punched through with tunnels, and antignocchi is full of holes like Swiss cheese. Also, there are nuclear waffles. Because who doesn’t like waffles?

This pasta layer is only 100 to 250 meters thick but it’s so dense that it may contain more than half of the crust’s total mass. That means it’s important to understand it since if you know how its density is laid out, you can predict the ways it might behave. To that end, the researchers created computer simulations of the stuff and figured out how much force it took to break.

It turns out that breaking nuclear pasta takes a lot of force — 10 billion times the force required to crack steel, to be precise. In a press release, Horowitz put it plainly: “This is a crazy-big figure.”

Knowing that helps us know a lot more. Magnetar outbursts, starquakes, and importantly, neutron star mergers are all thought to involve the crust breaking. That last example was the source of the first direct detection of gravitational waves by LIGO back in 2017, and the hope is that LIGO could detect similar waves produced by the spinning of a single neutron star.

But those waves will only happen if the neutron star’s crust is lumpy and dotted with mountains — which in neutron star terms means it would need to have peaks only a few centimeters tall. But the stiffer the crust, the larger these mountains could be. According to these simulations, the nuclear pasta is stiff enough to support mountains tens of centimeters call, which are definitely big enough to produce the kinds of continuous gravitational waves that LIGO is now looking for.