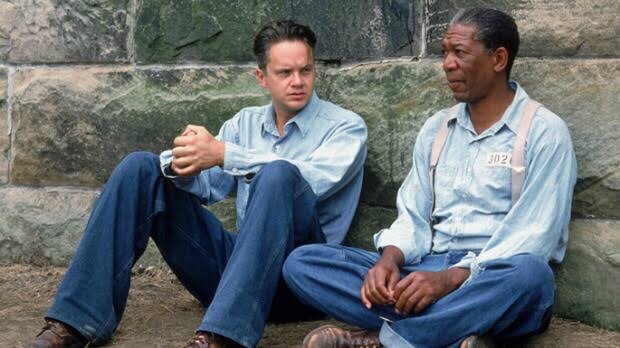 The last place one would expect to find hope would be a prison. Likewise, the last movie in which one would expect to find hope is a prison movie. However, in The Shawshank Redemption (1994) hope is exactly what we get. The Shawshank Redemption is without a single riot scene or horrific effect, it tells a slow, gentle story of camaraderie and growth, with an ending that abruptly finds poetic justice in what has come before. Adapted from the Stephen King novella Rita Hayworth and Shawshank Redemption, the film tells the story of Andy Dufresne (Tim Robbins), a banker who spends nearly two decades in Shawshank State Prison for the murder of his wife and her lover despite his claims of innocence. He is given two life sentences and sent to the notoriously harsh Shawshank Prison. Andy always claims his innocence, but his cold and measured demeanor led many to doubt his word. During his time at the prison, he befriends a fellow inmate, Ellis Boyd “Red” Redding (Morgan Freeman), and finds himself protected by the guards after the warden begins using him in his money laundering operation.

The first night for everyone in every prison is apprehensive, be it the prison of marriage or the literal meaning of prison. During the first night, the chief guard, Byron Hadley (Clancy Brown), savagely beats a newly arrived inmate because of his crying and hysterics. The inmate later dies in the infirmary because the prison doctor had left for the night. Meanwhile Andy remained steadfast and composed. Ellis Redding (Morgan Freeman), also known as Red, bet against others that Andy would be the one to break down first, but he loses a considerable amount of money.

After spending 20-odd years, Andy finds out the way out of the prison. How he manages to do the impossible and break the invincible chain of the prison forms the crux of the movie. The Shawsahank Redemption is not a movie; this is a lesson in itself. It preaches patience and perseverance. The Shawshank Redemption works not only as an excellent prison drama, but also as a metaphor for overcoming our own private prisons.

As usual Morgan Freeman delivers a long lasting performance and is very gripping and compelling to watch. Cinematography has been outstanding. The last wide shot of the blue Pacific ocean is enthralling and simply awesome. Costumes were designed that perfectly fits with the attire worn by prisoners.

A film is a director’s portrayal of sensibility on the screen. Director Darabont explores the range of human kindness and cruelty as he lovingly and patiently sculpts his large cast of characters against magnificent scenery.

Ultimately, the standout actor is the venerable James Whitmore, doing his finest work in years. Whitmore’s Brooks is a brilliantly realized character, and the scenes with him attempting to cope with life outside of Shawshank represents one of the film’s most moving and effective sequences.

“Salvation lies within,” advises Warden Norton at one point. It is the presentation of this theme that makes The Shawshank Redemption unique. Prison movies often focus on the violence and hopelessness of a life behind bars. While this film includes those elements, it makes them peripheral. The Shawshank Redemption is all about hope and, because of that, watching it is both uplifting and cathartic.

Though Forrest Gump, a Tom Hanks movie, won the Oscar for that year (1994), yet The Shawshank Redemption won my heart. And winning hearts is more important. Prison is the only place where the value and importance of freedom can be realized. The Shawshank Redemption establishes the truth. Watch the movie and break free yourself from the prison of life’s problems.