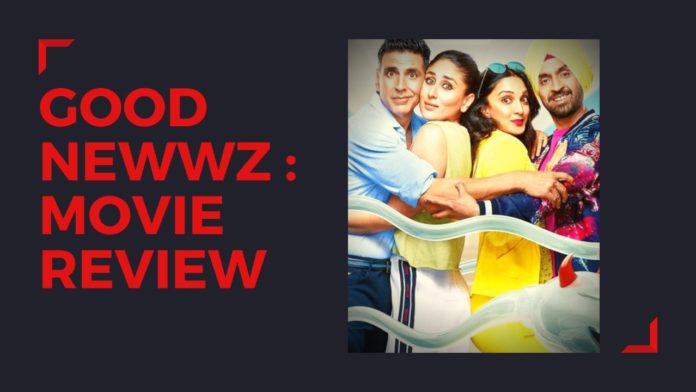 Let me remind you of a quote by Don Herold- “Babies are such a nice way to start people.”

Well the genre of Good Newwz might belong to Ayushmann Khurranna, but the good news is – You don’t miss him! First things first- a huge shout out to the team who casted the four leads for the film. Twenty minutes into it and I realised how each one of them is effortlessly nailing their parts, and so is the camaraderie between the characters which is really sublime and unparalleled. It’s not often in Bollywood that all the characters of an ensemble film are given equal importance, and Good Newwz manages to get that thing right.

Film tells the story of two Batra families. Varun and Deepti Batra (played by Akshay Kumar and Kareena Kapoor respectively) are a rich, high society couple (Remember the elder Sarabhai?) living in a posh area of Mumbai and are riding high on success. But the only problem is – they can’t have a baby and a few scenes later we find the couple in an IVF Centre. All hell break loose when the sex cells of the posh Batra gets mixed with another loud mouthed Batracouple from Chandigarh- Honey (played by Diljit Dosanjh) and Monika (played by Kiara Advani). But now it is late and both Deepti and Monika are pregnant with ‘spams’ (sperms)of each other’s husbands. What happens next is a comedy of errors and forms the main crux of the film.

Let us look at Akshay Kumar’s last few films of 2019- Housefull 4 (a blockbuster comedy), Mission Mangal (Akshay’s first 200 crore film) and Kesari (one of the highest grossing period films of all time and the only film of Dharma that worked this year). Akshay Kumar is definitely having the best of his career and with the kind of films he is picking, it is evident that he is not limiting himself to any genre. Akshay Kumar is a riot in Good Newwz. He has brought freshness in the most cliched of the lines. And he is well supported by the other three. Even Kiara Advani, whom we last law in the superhit (and the most talked about film of 2019) Kabir Singh, is highly effective as a loud mouthed Punjabi women (and now one of my most favorite female characters of 2019).

Writing of this film is highly original and impressive. There has been a trend to sell average films by using sex-related issues (as in Khandaani Shafakhana, Made in China) but here the co-writer and director Raj Mehta doesn’t try to force anything. Keeping the mood of the film light-hearted and funny, he makes sure you get to the point he is trying to put forward. There is a minor slapstick element in the comedy but they mould well in the script. Akshay and Kareena are definitely a pair that should be repeated often- their chemistry really works. I will not spoil anything but the last thirty minutes of the film is an intense tearjerker and it works only because the director has given the audience enough time to get into the thought process of all the four characters.

Well, New Year is almost here and if you want to have some good time with your family and friends- Good Newwz is a good film to say Good Bye to 2019!