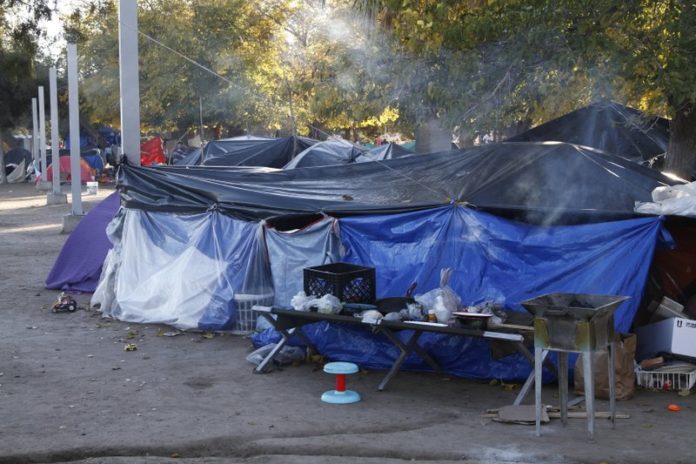 CIUDAD JUAREZ, Mexico — An exodus of migrants fleeing drug cartel violence and corruption in Mexico has mired hundreds of immigrants in ramshackle tent camps across the border from El Paso and brought new chaos to a system of wait lists for asylum seekers to get into the U.S.

Migrant tent camps have been growing in size at several border crossings in Ciudad Juarez, driven by a surge in asylum seekers from regions in southern Mexico gripped by cartel violence.

One camp in Juarez is populated by about 250 Mexican asylum seekers, who are living in increasingly cold conditions as they wait for U.S. authorities to let them in to the country.

They are among thousands of immigrants along the border waiting in Mexican cities, often for several months at a time under daily quotas set by Customs and Border Protection officials that govern how many people get to request asylum at each location.

The wait lists are typically run by local Mexican officials and organizations in consultation with the U.S. government, but the Mexican immigrants rejected the lists in Juarez and opted to organize their own system at each port of entry. Officials in both countries agreed that Mexican immigrants should have their own waiting list and not one managed by government authorities in Mexico because many of them are fleeing corrupt government authorities in Mexico.

“American officials told us you know what, we can’t deny Mexicans entry. In the end it’s the country that they’re fleeing,” said Enrique Valenzuela, director of Ciudad Juarez’s Centro de Atención a Migrantes.

The latest developments in Ciudad Juarez appear to be the first time that CBP has honored multiple lists in a single city, spawning a new level of confusion and competing camps with hundreds of Mexicans at each one as temperatures fall below freezing. Critics of President Donald Trump’s immigration policies have condemned the wait list system and a separate program, known as Remain in Mexico, that has sent tens of thousands of migrants back in Mexico as their immigration court cases to play out.

Customs and Border Protection officials say they have no role in operating the lists and are merely performing “queue management” at border crossings based on capacity to process asylum seekers.

On Tuesday evening in Juarez, smoke wafted from wood fires across the sea of blue and black plastic tarps as mothers cobbled together dinner for their families.

At the end of the camp, cars filling six lanes of traffic honked and jockeyed for position coming and going from The Bridge of The Americas, a border crossing bustling with tractor-trailers, taxis and commuters.

The most common reason the camp’s occupants flee their homes in Mexico is the inability to pay protection money to local gangs. A father from Ciudad Hidalgo, Michoacan, said he closed his mechanic’s garage after gangs demanded higher and higher monthly fees until he couldn’t make the payments and they threatened to kill him.

In the two months he’s lived here in a plastic tent with his wife and 8-year-old daughter, they’ve endured the fluctuating temperatures of the desert and inclement weather that ranges from dust storms to rain. A narrow trench around the tent aims to keep runoff from flooding the place where his wife and daughter sleep.

“In a single week, one lives through every climate,” he says.

The immigrant, who asked his last name not be used, anticipates staying here until January, and the temperatures are already approaching freezing.

The Mexican government has set up shelters that have capacity, but he can’t go there because he’ll lose his place in line.

Cities like Juarez have had to manage growing migrant populations since the start of the Trump administration’s efforts to push people back and make them wait south of the border.

Despite a commitment from both the U.S. and Mexican governments to safeguard migrants from other countries, the encampments and shelters appear to have little support outside of pastors and local aid groups on both sides of the border.

The first Mexican migrant camp in Juarez started at the base of a bridge where shootings, muggings and stabbings are common. Many opted for the camp in the park because it was less dangerous.

In Matamoros, Mexico, roughly 700 miles (1,126 kilometers) from Ciudad Juarez, an estimated 2,000 people are waiting in tents next to a border bridge. There’s little access to running water, sanitary living conditions, or healthcare. One small nonprofit, Global Response Management, started issuing flu vaccines this week after purchasing them from a local pharmacy at roughly $50 a dose.

Some desperate parents have sent their children alone to the bridge to Brownsville because the U.S. government exempts children deemed “unaccompanied” from being rejected under the wait list system or “Remain in Mexico” program. The parents hope their children will eventually be placed with a relative on the other side.

The wait lists are being challenged by immigrant advocacy groups in courts and by migrants themselves, some of whom have been storming guarded areas of the border to force Customs and Border Protection officers to process them. Many immigrants have been victims of robberies, sexual assaults and other crimes carried out by cartel gangs.

As night falls on the Juarez camp, a 16-year-old girl who fled the sexual advances of a cartel boss in the violence-plagued city of Guerrero stops by a row of tents with her mother. They were deported after spending about a week in Border Patrol custody. Her documents say that she didn’t pass an initial test for asylum called a “Credible Fear Interview.”

“Battles to enter, battles to leave,” the teen says, listing off the paperwork and interviews they had to do even after their asylum claim was denied.

Her father wants to return to Guerrero, where they own their home, but she doesn’t want to go back. They agree they’ll probably try and work and save in Juarez for a year or so before they make a decision. That way, she can go to high school without worrying about getting picked up by the mob boss. Maybe he’ll forget her.

“That was our tent, but now there’s somebody in it,” her mother says, pointing to an asylum seeker who has her former place in line. “I don’t know where we’re going to sleep.”

The camp sits on the edge of a towering monument to Benito Juarez, the pro-capitalist legal scholar and president after whom the city was named. In the 1850s, he lived in political exile in New Orleans, Luisiana, working at a tobacco factory.

The first Mexican president with indigenous heritage, Juarez became a lawyer and then a judge, advocating for the rule of law in the 19th century and leaving for his children a statement of principles quoted in brass letters along the white stone of the memorial abutting the tent camp.

“The law has always been my sword and my shield,” it reads.

Now, the decorative black metal fence around the monument serves as a laundry line for the clothing of refugees caught between impunity in Mexico and a virtual wall of Trump administration directives that has nearly ended asylum in the U.S.