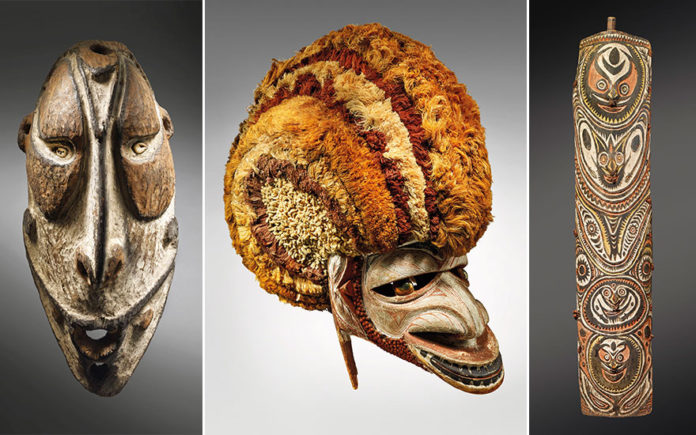 Melanesia is a subregion of Oceania extending from New Guinea island in the southwestern Pacific Ocean to the Arafura Sea, and eastward to Tonga. The region includes the four independent countries of Vanuatu, Solomon Islands, Fiji, and Papua New Guinea, as well as the French special collectivity of New Caledonia, and the Indonesian region of Western New Guinea. Most of the region is in the Southern Hemisphere, with a few small northwestern islands of Western New Guinea in the Northern Hemisphere.

Melanesia is a fusion of two words ‘Mela’ which means ‘black’ and ‘nesia’ which means ‘islands’. Melanesia means ‘black islands’. Melanesian Art refers to the arts done by the black people in islands such as New Guinea, the dominant island, New Britain, Solomon’s island, New Caledonia, New Ireland and Fiji all in the Pacific Ocean. Their arts dates back to either 2000 BC or 3000 BC yet their arts have seen only a few changes in this modern age.

Among the Melanesians, political powers were vested in the hands of groups of elderly men and in some areas women. These elders usually referred to as ‘Big men’ handled the affairs of the people in a communal fashion. Such elders are renowned for their political, historical, economic and warrior skills. Power and position were earned through the acquisition of knowledge that allows one to advance in the society. This knowledge is imparted through the commemoration of several festivals and initiation rites during which various art forms are used.

The people believed in life after death. They also believed that all activities of this life are controlled by ancestral spirits. This includes agricultural activities like yam productions, fishing, hunting and trading of artifacts. Elaborate ancestral rites are performed to honour, praise and seek help from the ancestors. They were believed to facilitate the transition of the soul from the world of the living to the realm of the dead.

The Melanesians engaged in many art forms such as sculpture, painting, pottery, architecture, and basketry.

Male and female ancestral figures were sculpted and used in the mortuary and memorial rites of the dead in wood, clay, and stone. Sometimes ancestors’ skulls were over modelled with clay in a likeness of the deceased. The head of the carved figure may be made bigger to contain the skull of the deceased. These were used in the ancestral cults. Also, Ceremonial chairs, sacred flutes, and masks fashioned from soft wood, vegetable fibers and rattan were produced and worn by dancers during the ancestral activities (Tatanua masks) and initiation rites (Hevehe masks). Special yam masks were worn during the yam cult to petition the ancestors for a bumper harvest. Large carved slit-gongs were used as instruments for communication to the people and as voices of ancestral spirits in the initiation rites of young men.

Canoe prows shaped like crocodiles with images of humans, birds and serpents were carved with spells invoked on them to ensure successful fishing and trading of Kula (white conus-shell arm ornaments). Bisj poles which were extremely long poles were carved from the trunk of the mangrove tree and used in head-hunting ceremonies.

The people constructed massive men’s ceremonial houses that served as meeting houses for the local youth during initiation rites. Men’s discussions of community issues were carried out there. Communal meeting houses where the affairs of the community and among individuals are deliberated and settled were constructed.

Masks were painted in various colours and they had symbolic meanings. For example, the Tatanua masks used in the funeral rites of the deceased were painted with black, white, yellow and red. These colours symbolize warfare, magic spells, and violence. The interiors and exteriors of the ceremonial houses were lavishly painted with ancestral figures and animal forms which had spiritual charms.

Body painting in the form of tattooing played a major part of their culture.