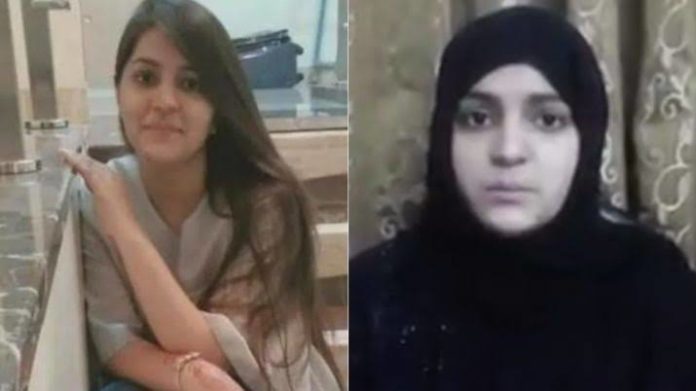 22-year-old Hindu girl had been kidnapped from Karachi in Pakistan and forced to convert to Islam. The woman had gone missing from the Defence Housing Authority (DHA) in Karachi earlier this month.

She was reportedly converted to Islam in the Ghotki province.

In the video, she can be heard saying that she converted to Islam as per her own free will.

Mehak added that she had gone to Dargah Bharchoondi Shareef in the Ghotki province and the formal conversion ceremony was held by Pakistani politician Mian Javed.

Meanwhile, Mian Mithoo, a maternal uncle of Mian Javed, told The Express Tribune that Mehak had visited his village along with a local Muslim man, identified as Muhammad Ashar. “She has willingly converted to Islam… It was not a forced conversion,” he said.

Mithoo further said that Mehak and Ashar left for Punjab after the conversion ceremony. “I just know that they were class fellows… Both the boy and the girl were intelligent,” he added.

However, the woman’s family had on December 13 filed an FIR at the Defence Police Station, stating that Mehak Keswani, the daughter of Amar Lal, had gone missing from DHA Phase 2. “She was living with us for some time,” said Dr Siri Chand, a maternal uncle of Mehak.

“Police did not act in a timely manner,” he further claimed, adding: “She was kidnapped but we have not received any call from anyone yet.”

The South Asia Partnership-Pakistan, in collaboration with Aurat Foundation, had in 2015 report revealed that that at least 1,000 girls are forcibly converted to Islam in Pakistan every year.