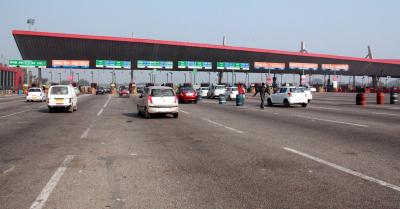 (IANS) To avoid chaotic scenes at toll plazas after the directive to turn toll lanes into FasTag lanes across the country, the National Highways Authority of India (NHAI) has decided to deploy marshals at all the plazas across the country to guide vehicles.

Besides, regional officers of the apex road development agency would personally monitor the congested toll plazas and based on traffic flow decide on marking lanes to cash lane subject to a cap of 25 percent of the total lanes.

With the roll-out of all FasTag lanes plan kicking on Sunday, the Ministry of Road Transport and Highways (MoRTH) has also relaxed its previous order which mandated declaration of all the toll lanes into RFID-based FasTag lanes. The move is aimed at minimizing inconvenience to the general public but is a temporary measure.

Accordingly, depending on the traffic pile-up at high traffic volume fee plazas, not more than 25 percent FasTag lane of fee plaza may be temporarily converted to hybrid lanes.

The Ministry has directed the NHAI to do a daily evaluation of the traffic and send a report to the Ministry to take corrective action.

“It is clarified that it is a temporary measure to be adopted for 30 days only to facilitate the smooth flow of traffic so that no inconvenience is caused to the citizens,” the Ministry has said in its communication issued on Saturday.

An NHAI official said that the true picture would emerge on Monday only given that Sunday is weekly off for most office-goers and commuters.

“We would take decisions depending on the situation. The actual traffic flow would be known only on Monday. But in order to ensure that the implementation is smooth, marshals are being deployed. The regional officers would be present tomorrow at congested toll plazas,” said an official.

In a bid to promote digital payment through RFID technology-based FasTag, the government had directed NHAI to turn all toll lanes at toll plazas FasTag lanes from December 1. But given that many vehicle-owners are yet to shift to FasTag, the roll-out plan was deferred by a fortnight till December 14.

Shifting to FasTag is set to make traffic flow seamlessly at toll plazas thus saving time and money for vehicle-owners.

The FasTag affixed on vehicle windscreens enable toll to be debited automatically from a linked account with no need for the vehicles to stop at the plaza.