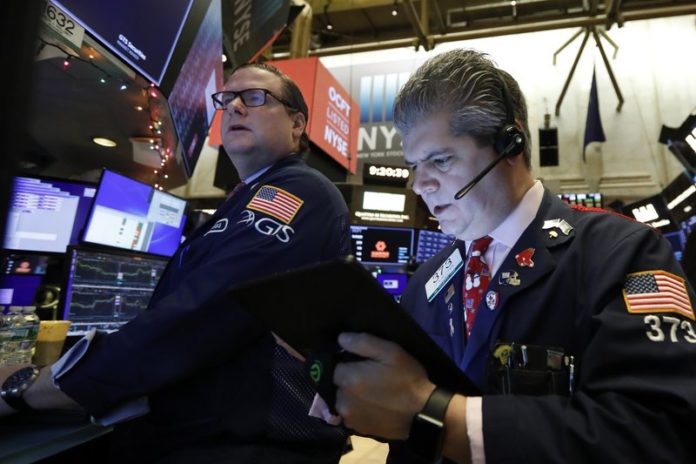 Stocks closed with tiny gains on Wall Street as investors weigh the news that the US and China have reached an initial deal in their long-running trade war. The agreement means the US won’t impose new tariffs on Chinese goods that had been set to kick in this weekend. Technology companies, which do a lot of business with China, led the gainers. The S&P 500 rose a fraction of a point to 3,168. The Dow Jones Industrial Average edged up 3 points to 28,135. The Nasdaq added 17 points, or 0.2%, to 8,734. Bond price rose, sending yields lower.

THIS IS A BREAKING NEWS UPDATE. AP’s earlier story follows below.

Major stock indexes were little changed Friday afternoon, hovering near all-time highs as investors weighed the news that the U.S. and China have reached an initial deal in their long-running trade war.

The agreement to a “Phase 1” deal means that the U.S. won’t impose new tariffs on Chinese goods that had been set to kick in this weekend. President Donald Trump and China made separate statements confirming the agreement. Media reports on Thursday that a deal was close sent the S&P 500 and the Nasdaq to record highs.

“This is a classic example of buy on the rumor, sell on the news,” said Lisa Erickson, head of the traditional investment group at U.S. Bank Wealth Management. “People obviously were excited about what they heard yesterday and now what you’re seeing is a consolidation now that it’s actually been confirmed.”

The costly trade conflict and the threat it could escalate at any moment has been the biggest source of uncertainty for Wall Street this year. The dispute has also hurt manufacturing around the world and caused U.S. businesses to hold back on making investments. The saving grace for the economy has been a strong job market and consumer spending.

Word that Washington and Beijing were pursuing a limited deal helped allay some of those concerns this fall, which helped spur the market higher after a sharp pullback this summer. But investors grew anxious earlier this month as the Dec. 15 planned rollout of U.S. tariffs on $160 billion worth of Chinese imports neared.

In addition to canceling the new tariffs, the U.S. also agreed to reduce certain existing import taxes on about $112 billion in Chinese goods from 15% to 7.5%. In return, Trump said on Twitter, the Chinese have agreed to “massive″ purchases of American farm and manufactured products as part of the initial deal.

It’s unclear how much the partial trade deal removes the uncertainty over another escalation in the dispute, which has had more than a few swings since it started 17 months ago.

“We see it as encouraging, but we don’t see it as a done deal, by any means,” Erickson said. “There may be a better possibilty that this is going to stick, but this is a key issue that has a lot sensitiivty for the U.S. and China, so it’s hard to say for certain that it’s all battened down.”

TRADE TRUCE: The latest development in trade relations didn’t have much of an impact on the market because it is essentially just a tariff truce, according to Jamie Cox, managing partner for Harris Financial Group. The next phase of the agreement will have to tackle some of the larger issues to actually provide relief from existing tariffs.

“It’s going to be a bigger lift in large part because the president doesn’t really want to take the tariffs off,” Cox said. “That’s going to require much more give on the Chinese part than what is currently in the offer.”

BREXIT BUMP: British stocks and the British pound moved sharply higher after a resounding victory for the Conservative Party eased uncertainty over the nation’s upcoming exit from the European Union. The benchmark FTSE 100 rallied 1.1%. Other European markets also closed higher.

STATUS DISLIKE: Facebook fell 1% amid reports that the Federal Trade Commission could block the company from integrating its messaging apps. Facebook has been planning to integrate its messaging apps, including Messenger and What’sApp, since early 2019. Federal regulators are concerned that the plan could make it hard to break up the company should the FTC find that necessary.

SHOPPED OUT: The government said U.S. retail sales rose at a seasonally adjusted 0.2% rate in November. The modest pace fell short of analysts’ forecasts for a pickup of 0.5% and suggests the holiday shopping season got off to a slow start. Shares in several department store chains fell. Macy’s dropped 2.8%, while L Brands slid 4%. Nordstrom was down 3.3%.