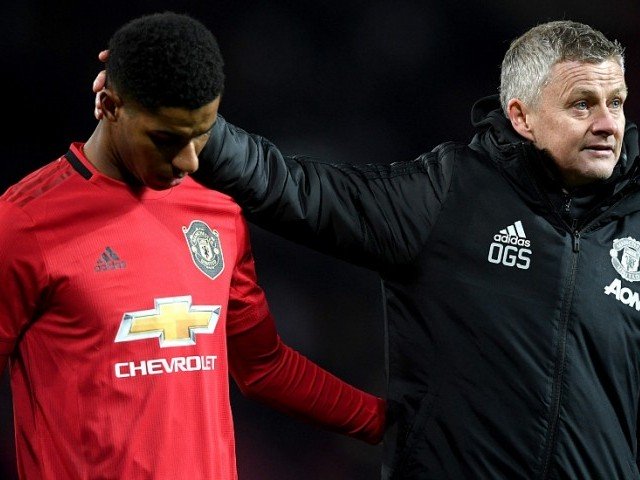 Manchester United threw away a second-half lead to remain eight points outside the Premier League’s top four with a 2-2 draw at home to Aston Villa on Sunday.

Jack Grealish put Villa in front with a superb solo effort, but United levelled before the break when Marcus Rashford’s header hit the post and came off Villa goalkeeper Tom Heaton into his own net before Victor Lindelof then headed the hosts in front.

But a week after Ole Gunnar Solskjaer’s men surrendered a late lead to draw 3-3 with Sheffield United, they did not learn their lesson as Tyrone Mings secured a deserved point for Villa.

The loss of those four points has cost United the chance to climb up to fifth in the table.

Instead they lie down in ninth and trail two points behind a revitalised Tottenham, who visit Old Trafford on Wednesday with new boss Jose Mourinho eying revenge against the club that sacked him 11 months ago.

“I wouldn’t be sat here talking about us sitting fifth if we had got that goal extra,” said Solskjaer.

“What I can say is so far we have had the lead in so many games and haven’t been able to win those games. Six or seven times we have been up and we should be better at seeing these games into wins.”

First, United themselves had to come from behind after a superb 11th-minute opener from Grealish, who has scored three league goals and made four assists this season.

Anwar El Ghazi burst down the right wing before crossing through the United area for Grealish to gather the ball on the left-hand side and take advantage of Andreas Pereira’s decision to back off by curling a precise shot into the top corner of David de Gea’s goal.

“It was a super goal but that’s what I’ve come to expect from him,” said Villa manager Dean Smith. “I thought the first 30 minutes he was running the game.

“But then he missed a chance he would have scored 99 times out of 100 and they go up the other end and score.”

That miss, just after the hour, saw Grealish slide in six yards out and shoot wide from a Trezeguet cross, although, by that stage, United had drawn level just before half-time.

Fred and Juan Mata moved a short corner onto Pereira, whose hanging cross towards the far post was headed off the post by Rashford and the ball ricocheted in via Heaton.

It was from another corner that United took the lead. Fred swung over a cross which took an unkind deflection off the head of Douglas Luiz, moving the ball onto the far post where Lindelof sent a powerful header flying past Heaton.

If Villa’s confidence was dented, they did not show it and took just two minutes to equalise when Matt Targett played an accurate cross onto the six-yard line where Mings was able to volley past the helpless De Gea.

United appealed for offside but VAR showed that Brandon Williams had clearly played the England defender on.