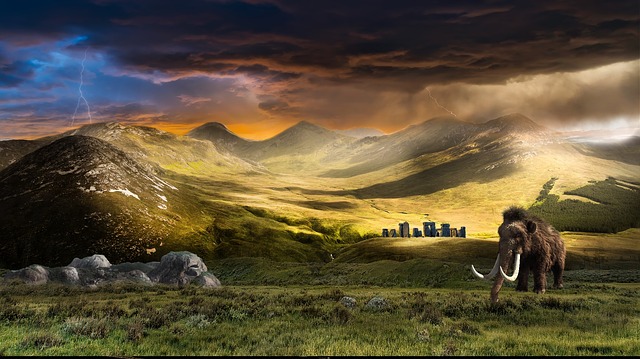 While the term “poo” causes most of us to giggle with glee of childhood memories, it could be one of the biggest factors in climate change, both today and in the past. A recent study has indicated that the cause for the last ice age could be due to mammoths and their ability to create huge quantities of methane.

Methane is a heat-trapping greenhouse gas and is 30 times more potent than carbon dioxide. According to the article, ‘it was not enough to trigger runaway global warming. But when all that gaseous output suddenly tapered off, it caused or at least contributed to a prolonged freeze known as the Younger Dryas cold event, they argue.

Calculations by a trio of researchers led by Felisa Smith of the University of New Mexico, published in Nature, show how all the pieces of this previously unsolved puzzle might fit together. Extrapolating from data on cows and other modern-day ruminants, the scientists estimated the total methane output of pre-historic megafauna at nearly 10 trillion grams per year.

At the same time, ice-core samples reveal that an abrupt drop in atmospheric methane levels of 180 parts per billion by volume (ppbv) coincides with both the virtual extinction of these gas-gushing herbivores and the onset of the deep chill that followed.’

Today it’s not large creatures that create huge quantities of gas, but the simplest of farm animals, the cow. On its on the cow could never have achieved such large quantities, but thanks for humans need of meat, milk and other products, we have breed them to the point that have become severe contributors towards climate change.

An animal that was much larger than the mammoth, which exists today, does the exact opposite. In a twist of dilemma, the animal we breed and populate our land with causes climate change, while the animal that we have killed in large populations to the point of almost extension, might be the solution.

The whales waste is rich in iron which stimulates the growth of phytoplankton, which in turn, serve as carbon traps that remove 400,00 estimated tons of carbon from the atmosphere each year, according to an article. Each time the sperm whale comes to the surface it releases about 220, 462 tons of carbon dioxide. But every time they go for “a number two” it stimulates the drawdown of 440, 925 tons of carbon.

“If Southern Ocean sperm whales were at their historic levels, meaning their population size before whaling, we would have an extra 2 million tonnes (2,204,623 tons) of carbon being removed from our atmosphere each and every year,”

“However, most whales are currently at 1 to 10 percent of their historical population sizes, so in the past, whales may have made a substantial contribution to carbon drawdown,” Lavery said, adding that other marine mammals probably beneficially redistribute carbon just as whales do. These may include seals, sea lions and other types of whales, such as fin whales.

Thanks to marine protection areas, programmes and endangered species protection, these giants of the deep might be able to help us find the answer to our cow problems.

As one of the monkeys said in the cartoon movie, Madagascar, “If you’ve got any poo – throw it now.”