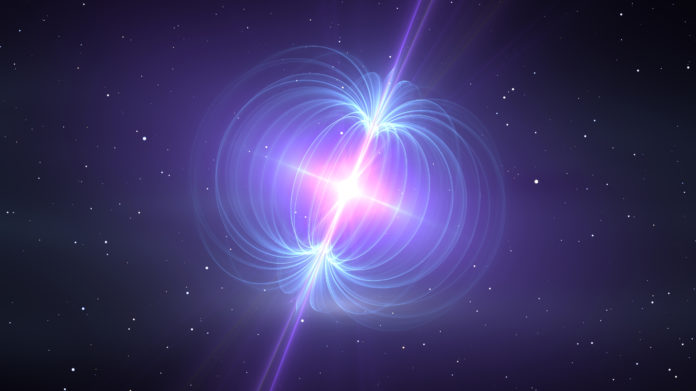 Magnetars are one of the most extreme and mysterious objects in space. They’re surprisingly small, they’re incredibly dense, and, as their name suggests, they pack one heck of a magnetic pull.

At the final stage of a star’s life, it explodes into a supernova. As it collapses in on itself, it outshines all of its neighbors before fading slowly away. If the living star was big enough, it leaves over a neutron star: a star so dense that, although it can often be the diameter of a small city, a teaspoon of its matter weighs at least a billion tons. Meanwhile, they spin fast—really fast. Hundreds of times per second fast. All this density equates to a really powerful magnetic field — about a trillion times more powerful than Earth’s. But magnetars? Scientists aren’t sure why, but they’re an especially magnetic form of the neutron star. Their magnetic fields measure at about 1,000 trillion times that of Earth.

Scientists have been on the search for magnetars since 1979, when a shock of gamma rays (later identified as coming from magnetar SGR 0525-66) pulsed through the solar system, resulting in space equipment disruptions and atmospheric abnormalities. In the decades since, fewer than 25 neutron stars out of about 2,000 across the galaxy have been dubbed magnetars, though a handful of other candidates are pending confirmation. From Earth’s standpoint, that’s a good thing. In 2004, effects from an explosion, or “starquake,” of SGR 1806-20, (50,000 light-years away), was powerful enough to impact the Earth. It damaged and disabled satellites, and even partially ionized the planet’s upper atmosphere.

All that, and you can understand why magnetars have earned the status of the most powerful magnet that’s been discovered in the universe so far. In fact, a magnetar’s magnetic field is so powerful that even coming within 600 miles of one would destroy your nervous system and change your molecular structure. Just a little bit closer and the gravitational force would literally tear you apart — starting at the atomic level. Good thing the closest one is thousands of light-years away. For the time being, scientists will just have to study these magnetic space oddities from afar.