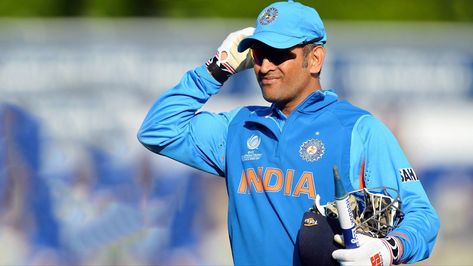 “Dhoni finishes off in style. A magnificent strike into the crowd. India lift the World Cup after 28 years. The party’s started in the dressing room. And it’s an Indian captain, who’s been absolutely magnificent, in the night of the final.”

Every cricket fan would still remember these words uttered by Ravi Shastri at the Wankhede Stadium on the night of 2nd April 2011. An unbeaten 91 against Sri Lanka by Captain Cool in the World Cup final will always remain more special than his mettlesome stroke-play of 148 against Pakistan at Visakhapatnam in 2005 or 183 not out against Sri Lanka at Sawai Mansingh Stadium in Jaipur in the same year.

On December 23, 2004, a barrel-chested 22-year-old with long locks made his international debut against Bangladesh in Chittagong. Today, he completes 15 years in international cricket. Mahendra Singh Dhoni has been admired by the masses not just for his cricketing and leadership skills but also his temperament.

Mahi rose from the cricketing arena of a naxal hit state of Jharkhand and lead India to unbelievable accolades. While today’s youth suffers from distraction, Dhoni had a level of focus that many have compared to Arjuna’s. He used micro-level evaluation as a method to plan the future. His focus and devotion when he romanced the ball with his eyes is a lesson for millennials. Yes, the wins, the matches, and the wicket-keeping is worthy of a book, but today I am here to pen life lessons from MSD.

Dhoni’s father was a pump operator. Yet this did not prevent him from dreaming big, a dream that he has been living with open eyes for the last fifteen years. His rags to riches story is one of belief and perseverance.

Even after he started to work as a ticket collector at the Kharagpur Railway Station, he listened to his inner voice and simultaneously joined the Railways Ranji team and continued to follow his passion.

No matter the circumstances, we should always believe in our inner potential and make all possible efforts to make our dreams come true. As the saying goes – “Shoot for the moon. Even if you miss, you’ll land among the stars.”

Life changes the minute we decide to face the stormy seas after passing through smoother ones. His decision of quitting the government job for cricket would have required a lot of courage and self-belief. It is never easy to leave a safe and secure option to pursue one’s passion.

But the dream that twinkled in his eyes mattered the most to him and he decided to put it all on stake to follow his heart’s desire. As they say, in the matters of heart, you always know what makes it skip a beat!

He knows how to remain calm and composed under pressure and inspires others to do the same. This trait helps him to think clearly and take match-winning decisions in various nail-biting and crucial situations. Dhoni’s balance of focussing on the match at hand, along with proactive preparation for the future ones makes him stand out from the rest of the talented cricketers in the world.

Dhoni has always led from the front. He has always been graceful enough to accept his mistakes when his decisions backfired. Yet, he did not take centre stage when the team won the World Cup and credited every team player for the win. By asking Sourav Ganguly to captain the team for some time in his farewell test match, he showed true sportsmanship by revering seniors of the game.

Dhoni knows his strength is in hitting big shots, playing under pressure and finishing off the game in style. This is precisely why he takes a match to the last overs to save his wicket and plays his best during final overs. You too should first identify your strength and capitalise upon the same.

The issues in your personal life should not impact your professional performance. Just before the Pakistan series, Dhoni told his late girlfriend that he would not miss her since that will distract him. He did not let his cricket get impacted even after his girlfriend’s sudden demise.

It is important to adapt to changes to grow in life. Dhoni started his career as a batsman, became captain and gave up captaincy. He perfectly adapted himself to the changing requirements and added value to the team.

Detachment from the results

“We are not thinking about what may happen if we achieve or what may happen if we don’t succeed because those two things are beyond our control.” These words by MS are an important life lesson – we should put all our energies into working hard for the final goal while being completely detached from what the end result would be.