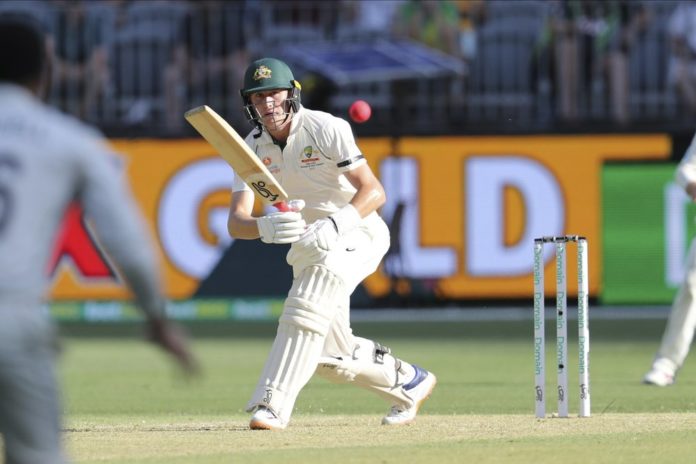 PERTH, Australia (AP) — Marnus Labuschagne scored a patient half-century as Australia was made to work hard for runs by New Zealand on the opening day of the first cricket test under lights at Perth Stadium on Thursday.

Australia was 157-2 in 57 overs at tea, averaging 2 an over. Labuschagne and Steve Smith were unbeaten on 66 and 30 runs respectively.

Resuming on 76-2 after the lunch break, Labuschagne and Smith struggled to score against the disciplined New Zealand swing and seam attack as temperature soared to 40 degrees (104 F).

Labuschagne, Australia’s newest batting find during the Ashes in England and then in the two tests against Pakistan, played a controlled innings as he reached his fifth half-century in his 12th test.

He scored 162 in the second test against Pakistan in Adelaide also under lights and, so far, remains the most prolific run-getter for Australia in 2019.

Smith, on the other hand, was uncharacteristically restrained and at times struggled. He took a blow on his fingers as he fended a short delivery from Neil Wagner, and on 19 was dropped by second slip Tom Latham off debutant fast bowler Lockie Ferguson.

Earlier, Wagner took a brilliant catch off his own bowling to remove opener David Warner just for 43.

Warner was coming off back-to-back centuries against Pakistan, including an unbeaten 335 not out in Adelaide 10 days ago. He stroked four boundaries and faced 74 balls before hitting a full toss back to Wagner, who took a sharp one-handed catch to his right.

Warner’s wicket was a timely breakthrough for New Zealand after Wagner replaced left-arm spinner Mitchell Santner and struck with the fourth ball of his second spell.

On a pitch that offered little assistance to the New Zealand bowlers, Warner and fellow opener Joe Burns shared 40 runs in the first hour after Australia won the toss, until swing bowler Colin de Grandhomme struck.

Burns, on 9, was adjudged lbw by umpire Aleem Dar, who was officiating in a record 129th test match. Burns failed to review the decision as he hit across the line, but replays showed the delivery missing leg stump.

Australia is unbeaten in six day-night tests, which are played with a pink ball.