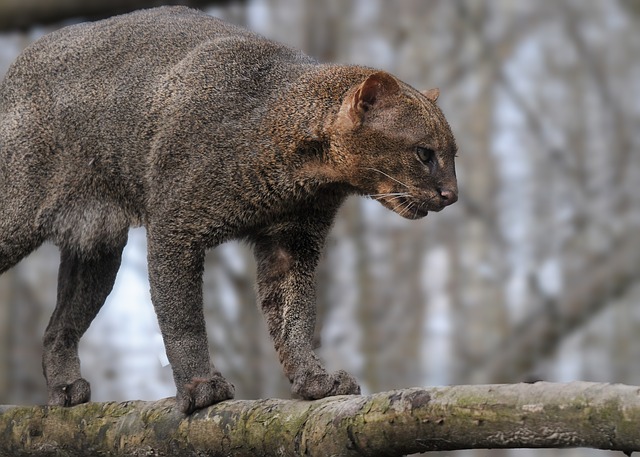 Jaguarundi is an interesting feline. It is unlike any other cat in its appearance, resembling an otter, with its small head, short rounded ear, elongated body and tail supported by small legs. Rightly, it has often been called ‘Otter cat’. It may weigh from six to twenty pounds and is around forty inches long – excluding a twenty inch tail.

Unlike most other felines, the Jaguarundi, Puma Yaguarondi, has a completely uniformly colored coat. Cubs are spotted at birth like those of lions, but with time the spots disappear to give a coloration ranging from grayish brown to red. Previously the color variations were attributed to unique species of this cat – but now it is understood that they are a normal trait of the Jaguarundi – with different colored cubs found in the same litter. Genetically the Jaguarundi resembles the Jaguar and the Cougar, with a similar chromosomal number.

Though highly adaptable, the natural habitat of this wild cat is dense forest and shrub area. It is an adept fish hunter and is usually found near water courses. Birds are frequently preyed upon, as are rodents, small reptiles, frog and domestic poultry – something that often brings conflict with farmers. It’s a good tree climber and a diurnal hunter. The predatory profile varies according to habitat as does its color – with paler variations found more in dry open areas and darker color seen in cats living in thickly forested parts.

Predominantly found in Mexico and South America, Jaguarundi has been seen in Texas, New Mexico and Florida. Various subspecies are recognized – based upon geographical distribution.

Predominantly a solitary predator, Jaguarundi may be seen to travel in pairs or come together in bringing up of the young. The average litter size is one to four, born after a pregnancy lasting for nearly two and a half months. The young are introduced to regular food at six weeks and gain maturity at around two years. In captivity Jaguarundi has been known to live for up to fifteen years. In the wild the Jaguarundi is seldom sought for its fur – something that’s fortunately not in high demand amongst traders. The primary danger to this unique wild cat is through deforestation and habitat destruction – largely due to human intervention in nature!