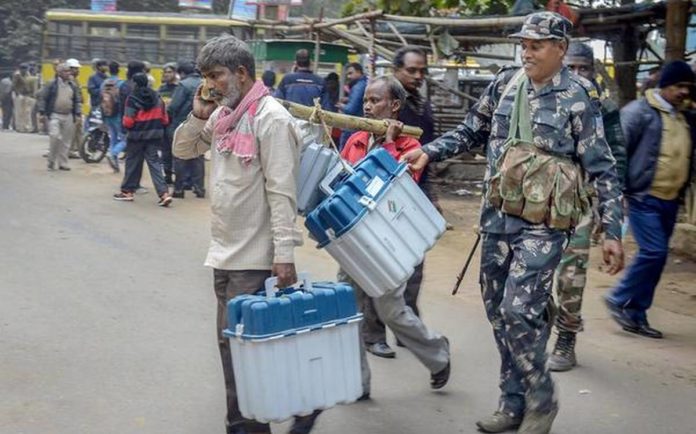 (PTI) Polling for the fourth phase of the five-phased Jharkhand Assembly election began in 15 constituencies on Monday.

The voting began at 7 am, Election Commission (EC) officials said.

It will conclude at 3 pm at Jamua, Bagodar, Giridih, Dumri, and Tundi, while for the rest of the seats, the voting will continue till 5 pm, they added.

He said 2,504 wheelchairs and 4,039 volunteers will help the differently-abled voters, adding that a transport facility was being provided to bring them to the polling stations and drop them back.

More than one electronic voting machine (EVM) will be used in four Assembly constituencies as there are more than 16 candidates in these seats, he added.

The key candidates in the fray are Land and Revenue Minister Amar Kumar Bauri (BJP) and Labour Minister Raj Paliwar (BJP) from the Chandankiyari and Madhupur seats respectively.

The ruling Bharatiya Janata Party (BJP), seeking to retain power, is contesting in all the 15 seats in this phase.

Its ally AJSU Party is contesting on its own for the first time since the creation of Jharkhand in 2000.

Challenging the saffron party is the opposition alliance of JMM, Congress and Rashtriya Janata Dal (RJD), which has fielded candidates in accordance with its pre-poll seat-sharing arrangements.

Three-time MLA Arup Chatterjee is seeking re-election from Nirsa, where he is facing a challenge from former minister and BJP candidate Aparna Sengupta.

The other parties that have fielded candidates are the Bahujan Samaj Party (BSP), the Jharkhand Vikas Morcha (Prajatantrik), the Samajwadi Party (SP), the Marxist Coordination Committee, the Janata Dal (United), the Lok Janshakti Party (LJP), the CPI(ML-Liberation) and the Aam Aadmi Party (AAP).

Of the total 81 Assembly seats, polling has been held for 50 in the first three phases between November 30 and December 12.

The fifth and final phase of polling for 16 seats will be held on December 20 and the counting of votes will be taken up on December 23.