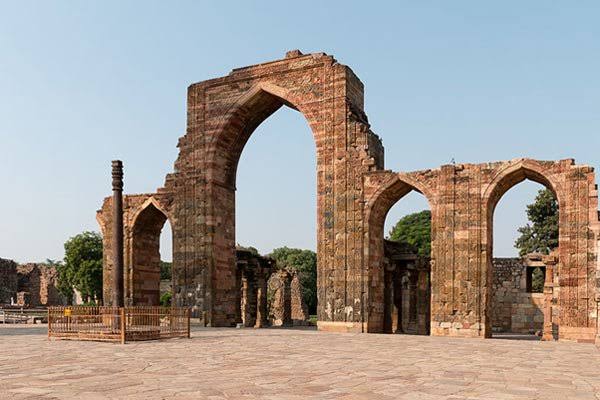 Monuments are the grappling chains that bind one generation to another. The Iron Pillar at Mehrauli, even today, astonishes the beholders; how has such a piece of ancient artistry remained rust-free? It is a metallurgists’ nightmare or dream, but one truly interesting thing is that the only other place where completely rust-free iron has been located, is on the rock samples that were brought back from the moon during the Apollo missions!

This marvel, which has been called a “testimony to the high level of skill achieved by ancient Indian ironsmiths in the extraction and processing of iron”, stands in the Qutub complex of Delhi. The pillar is a 23-feet high Kirti Stambh(Column of fame or Victory Column), weighs more than 6 tons and is made of 98% wrought iron. It is 7.2 m tall and is 1 m below the ground with a diameter of 48 cm at the foot, tapering to 29 cm at the top.

A structural analysis of the pillar reveals that it wasn’t cast. It was crafted through a daunting process of fabrication by forging and hammer, welding lumps of hot pasty iron, each weighing 20 to 30 kgs, in a step by step process.

The result is ornate and awe-inspiring, but no one knows just how long and mysterious its history is.

Evidence of a cannonball strike – approximately 4 m from the current courtyard ground level can be noticed. There is an indentation that has been shown to be the result of a cannonball fired at close range. Although no evidence of the event is available, historians feel that Nadir Shah is likely to have ordered the pillar’s destruction during his invasion of Delhi in 1793.

An inscription on the pillar in the Pali script states it as Vishnudhwaj on the top of the mound known as Vishnupada. The Brahmi script inscription has been translated many times. It is a six-line, three-stanza inscription. Many scholars have interpreted the inscription and published their translations. The most often published is by Fleet in 1888. It speaks of a powerful monarch who had the pillar made but the name remains unknown. British historian Vincent A. Smith in 1897, studied this inscription but was amazed at another inscription lower down. While the inscription at the top of the pillar indicates it was king Chandra’s monument of victory, another one further down mentions King Anangpal II who ruled in Northern India during the late eleventh century.

‘He on whose arm fame was inscribed by the sword, when in battle in the Vanga countries, he kneaded back with (his) breast the enemies, who, uniting together, came against him, he, by the breeze of whose prowess the Southern Ocean is even still perfumed.’ He, the remnant of whose energy – a burning splendour which utterly destroyed his enemies- leaves  not the earth even now, just like (the residual heat of) a burned-out conflagration in a great forest; he as if wearied, has abandoned this world and resorted in bodily form to the other world – a place won by the merit of his deeds; (but although) he has departed, he remains on earth through (the memory of his) fame by the king, who attained sole sovereignty in the world, acquired by his very own arm and (possessed) for a long time ; he who, having the name of Chandra, carried a beauty of countenance like the full moon, having in faith fixed his mind upon Vishnu, this lofty standard of the divine Vishnu  was set up on the hill Vishnupada.”

This six-line, three-stanza Sanskrit inscription in verse form, covers an area about 2’9″ in breadth and 10″ in height at a level of about 7′ from the stone platform. It is believed to be one of the oldest inscriptions in verse form in the Indian history.

The characters are distinct showing minimal corrosional damage, but for the slight rounding of the sharp edges. Interestingly, the characters of the inscription are straighter rather than rounded.

An important aspect of the characters of the Iron Pillar inscription that needs to be explained is how they were put up on the pillar. Balasubramaniam and Prasad have stated that the verse has been inscribed, thereby implying that the characters were created by gorging out material from the surface. The other method by which precise depressions can be created on a malleable surface is by die-striking. In the die-striking operation, the die with the required impression to be imprinted, is placed on the surface and an impact force is applied to the die, such that the impression of the die is reproduced on the surfaces.

For several years, it has been believed that if a person, with his back touching the pillar can make the fingers of both hands touch, luck befalls him. The sight of tourists, around this tall, sleekly tapering pillar, trying to make the fingers of two hands touch while holding the pillar in embrace is quite common. Very few succeed, but there is a wave of mirth when such attempts are made.

Many devout Hindus, in the previous centuries, believed that the mighty Bheem (the brave Pandava of the Mahabharata) lifted the pillar with his right hand and impaled it in the ground.

Several bard songs speak of Anangpal, that Tomar dynasty ruler who governed the territories presently falling under the states of Delhi, Haryana, and Rajasthan, as establishing his majestic citadel at Red Fortress, surviving as vast ruins in the vicinity of Qutub complex and transporting the coveted pillar to his capital Delhi. It is said that the Emperor Anangpal, on the occasion of his grandson’s birthday consulted the great sage Vyas about the auspicious time to establish the citadel:Sage Vyas advised him that if he did so at once, the foundations of his dynasty would go deep enough to strike the head of the serpent Sheshnag (a mythical, gigantic snake according to Hindu mythology, that supports the entire planet on its head and lives  deep underground) and be embedded perennially in the country.

The unprepared and doubtful Emperor delayed and the sage taking offense took an iron spike and drove it is so deep into the earth that when he pulled it out it was splurged deep crimson red with the serpent’s blood. It is believed that the spike was the pillar itself and the enraged sage prophesied, “The pillar has become loose, and thus the Tomar shall lose his realm.”

Accordingly, the dynasty came to an end and Anangpal’s grandson (daughter’s son) Prithviraj Chauhan inherited the reign from him and sometime later lost it to Mohammad Muizuddin bin Sam “Ghori” in AD 1192.

Several naive believers also claim that the pillar was carved out of a large meteoroid that made impact somewhere in Central India. Others go a step further and claim that aliens themselves embedded it in Mehrauli’s landscape.

The purpose of the iron pillar of Delhi is one of its many mysteries. Some say it was a flag staff made for the king mentioned in the inscription. Others say it was a sundial at its original home in Madhya Pradesh.

Why is it no longer in Madhya Pradesh is yet another mystery. There is no evidence of who moved the pillar a thousand years ago, how it was moved or even why it was moved.

The biggest and the most talked-about mystery regarding the Iron Pillar of Delhi is how it has gone untarnished for this long?

According to a popular translation of the Brahmi script on the pillar, the pillar was made for an unknown king. It was also made to honour one of the most important Hindu God -Vishnu.

Several leading archaeologists, however, are of the opinion that the pillar was brought to Delhi as a trophy by the Slave Dynasty Emperor Shamsuddin Iltutmish (ruled AD 1211-36) following his conquest of the Deccan.

Archaeologically, the inverted bell-like appendage surmounting the tapering cylindrical pillar is a feature of the artistically glorious Gupta period temple architecture. Thus, it can be conclusively proved that the pillar was originally a part of a Vishnu temple built by Chandragupta II and was shifted to the Vishnu temple that Anangpal built at the site where the Qutab mosque exists today.

Whatever be the reason of the Iron Pillar remaining rust-proof, whoever be the Chandra King mentioned in the inscription, however, the Pillar was shifted from Madhya Pradesh to Delhi, the sight of the Iron Pillar is continual and stationary music, which one hears as one approaches it. It shall endure its greatness until the sun grows old.