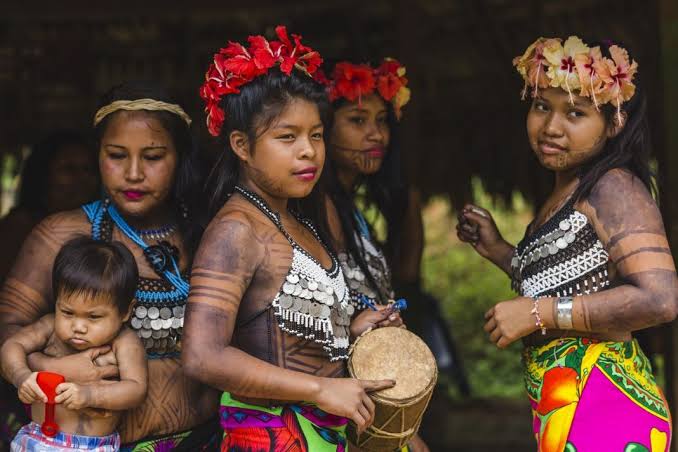 To date, indigenous people of Panama number about five percent of the country’s population and are located in the most remote parts of the isthmus. There are seven recognized tribes of indigenous people in Panama. They are the Nôbe-Buglé, Teribe, Kuna, Embera-Wounaan, Guaymi, Talamanca, and the Bokata. They range from almost completely assimilated to groups holding on to their traditions with dear life and white knuckles as the sands of time move them into a more West bound direction.

The Guyami and Nôbe-Buglé comprise roughly one half of the indigenous population of the country and reside mainly in Chiriqui Province. These two tribes speak Spanish but have strived to preserve their traditional way of life. The Teribe are fiercely proud of their language and will not even use Spanish words for non-native objects. The Kuna live on the Caribbean side on a comarca called San Blas. They also reside in Western Panama and in the mountains of the Darien.

The Embera occupied the south-eastern portion of the Darien. Most were bilingual in Embera and Spanish and many have intermarried with Colombian blacks. The Bokota live mainly in eastern Bocas Del Toro and share a linguistic commonality with the Guayami. The Bokota live in a region so remote, that up until the mid-eighties hardly a road existed.

The Terribe is another small tribe. Their population was devastated by epidemics when tuberculosis attacked villages between 1910 and 1930. But after the 1950s their population began to surge. A Seventh Day Adventist mission was active with the tribe for many years, trying to forcefully get them to dump their religion. To this point they have adopted the dominant mestizo culture and their knowledge of the natural history is mesmerising. Things got so bad in the 1980´s that some began raiding the ancestral burial grounds for gold to sell.

The literacy rate is lower for natives than it is for any other ethnic group in Panama. Twenty years ago, the illiteracy rate was at over 80 percent compared to almost 20 percent of the population at large. But there has been much improvement. Before the government got involved, their education was conducted through missionaries who also tried to force Christianity on them. There are hundreds of Indian schools now and their education is improving rapidly. Their future, it appears, is now in their hands.