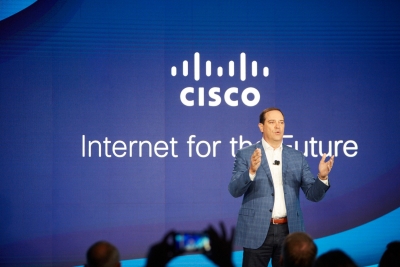 (IANS) In what seems to be a technology breakthrough, impacting the lives of billions of people, Cisco, an American technology giant, has unveiled a new innovative chip and router, saying that it will power the “internet of the future“.

The new internet, according to Cisco, would be faster, cheaper and extraordinarily efficient in shaping the future of the world. In making the internet more affordable, hundreds of software engineers in India have also contributed significantly to make a dream come true for Cisco.

Unveiling a series of innovations here in San Francisco, the Chairman and CEO of Cisco, Chuck Robbins said on Wednesday that his team was transforming the industry to build a new internet for the fifth-generation advanced wireless technology (5G).

“Just imagine the scale of internet users… By the next three years, 49 billion devices would be connected to the internet as there would be around 4.8 billion users across the globe. Being the backbone of the internet, Cisco has a lot of responsibilities,” he said.

“Today we have launched Silicon One, the world’s most powerful carrier routers built on the new silicon.”

“Over the years, digital experiences will be created with advanced technologies – 16K video streaming, AI, quantum computing, predictive cybersecurity and other things not yet invented.

On being asked that Cisco has the largest tech workforce in India outside of the US, and how the company rates their efficiency, Goeklar, who is considered the second important executive in the Cisco after Robbins, said: “We have a fantastic team in India, the biggest outside California. There are 10,000 engineers (in India), a tremendous team. We have a great business in India, we partner with some of the biggest service providers there. And let me say that hundreds of engineers in India have also contributed to these new innovations. We are proud of them.”

During the launch of new innovations, some of Cisco’s top customers including Google, Microsoft, Comcast, AT& T, Facebook and Disney Studios also shared the dais.

Disney’s Vice President of technology innovation, Ben Havey said that his company was all in with Cisco’s vision.

“When you think about the network, it’s a river that runs through our business… The internet becomes important as streaming (of videos and films) is catching on,” he said.

Facebook’s global head of connectivity, Dan, Rabinovitsj said that as the number of users on its social network site swells, a faster and efficient internet becomes essential for the smooth functioning of the social media giant.

According to a senior Cisco executive, the ”internet of future”, would also help fuel an economy that’s hungry for more and faster internet bandwidth for the next couple of years.

The executive said that Cisco’s efforts would certainly make the internet cheaper for the people through its advanced technological innovation.