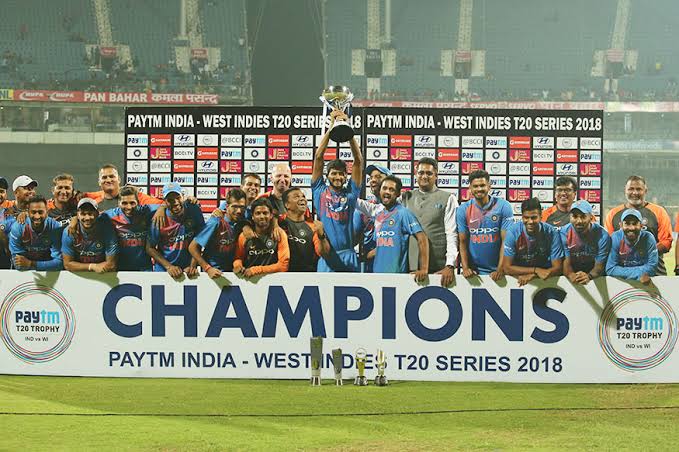 NEW DELHI – Skipper Virat Kohli’s masterly 85 set up India’s successful chase as the hosts pipped West Indies by four wickets in the third and final one-dayer to complete a 2-1 series win on Sunday.

Chasing 316 for victory, India got off to a strong start but lost Kohli at a crucial juncture before eventually prevailing with eight deliveries to spare at Cuttack’s Barabati Stadium.

Earlier, West Indies posted an imposing 315-5 with skipper Kieron Pollard and Nicholas Pooran capitalising on a strong start hitting 10 sixes between them.

Indian quicks used the short ball to good effect to restrain openers Evin Lewis and Shai Hope after Kohli won the toss and elected to field.

Lewis fell for 21, trying to break free and holing out in the process to Navdeep Saini who made an impressive debut replacing the injured Deepak Chahar.

The right-arm quick dismissed Shimron Hetmyer (37) for his maiden ODI wicket and also sent back Roston Chase (38) to reduce West Indies to 144-4 in the 32nd over.

Pooran and Pollard then launched a spectacular onslaught, effortlessly clearing the boundary as the tourists plundered 118 off the last 10 overs to breach the 300-mark.

Shardul Thakur eventually dismissed Pooran for 89 but Pollard remained not out on 74, smashing seven sixes in his 51-ball blitz.

A strong start was imperative to pull off such a big chase and India got the same from KL Rahul and Rohit Sharma who raised 122 runs for the opening stand.

Rohit Sharma made a run-a-ball 63 and Rahul scored 77 but the onus was on Kohli and Shreyas Iyer to accomplish the chase once the openers departed.

After four successive half-centuries, Iyer fell for seven while Rishabh Pant and Kedar Jadhav also failed with the bat.

Kohli appeared to enhance his formidable reputation of anchoring successful chases but his dismissal in the 47th over injected fresh drama into the contest.

Thakur smashed Sheldon Cottrell for a six and followed it with a boundary to ease pressure before Ravindra Jadeja, who made 39 not out, scored the winning run.